A Brexit legacy of betrayal for the nation’s food firms 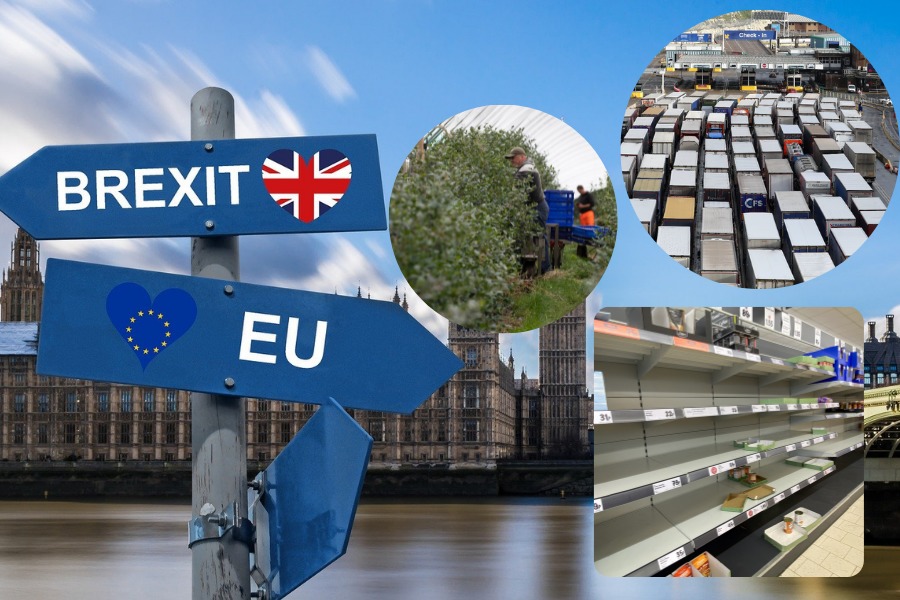 BETRAYAL and broken promises to the nation’s farmers and food businesses are fast becoming the bitter legacy of the UK Government’s botched Brexit deal with the EU.

Since January 1, British exporters have been crippled with bureaucracy at the border, facing mountains of unnecessary paperwork and burdensome costs to transport goods to the EU, whilst imports have been able to sail through customs into the UK without another thought.

This was due to change from October 1, with equivalent border checks on imports to be brought in and an even playing field created at last, but the UK Government has announced another grace extension, with checks to be phased in between January and July, next year.

For several weeks there had been whispers among the industry of further delays to import checks, but it seemed ludicrous. Why would the UK Government, who sold its Brexit dream to the people as on opportunity to “take back control of our borders”, sign off on a move that would give all control to the EU and none to ourselves?

Not only is this announcement a slap in the face to our own businesses, who continue to be placed at a disadvantage with their European counterparts, but the decision was taken without consultation with the devolved nations of the UK. If the UK Government wanted to cook up a reason why independence might look that little bit sweeter to undecided voters, then this blatant lack of respect of Scottish business interests would do the job nicely.

But why is the UK Government giving a free pass to the EU? Lord Frost appears to think it will give more time to UK businesses who rely on goods from the EU to adjust to the new process and focus their attention on the current labour crisis.

Of course, on some levels this is sensible and the labour and supply challenges facing businesses can’t be overstated. But what consolation does that offer businesses who were told on Christmas eve that a Brexit deal had been struck and had less than a week to adjust to a new trading environment.

The Food & Drink Federation this month reported the food and drink industry was £2 billion worse off after a “disastrous” fall in sales to the EU this year.

With the food and drink industry in need of a boost, it was great to see the start of British Food Fortnight this Saturday, marking the yearly celebration of all the fantastic food grown and produced on our shores – an opportunity to thank the hard-working individuals across the supply chain who keep our supermarkets shelves stocked and our nation fed.

At a time where support for the industry has never been more important, it is shameful the UK Government continues to sell out British farmers from their Westminster benches yet, to keep favour during this annual celebration, will find time to post a photo or message of support online. The irony is nauseating.

Liz Truss, before she ascended to her new role in the Foreign Office, spoke of the pending deal with New Zealand as a fantastic opportunity that would allow British shoppers to enjoy lower prices.

I agree there are benefits to be had with exploring new trade opportunities for British exports, but could the Government be more out of touch with farming to look to make food even cheaper at a time when it is also thinking of removing subsidies for farmers in England within five years?

Now, don’t get me wrong. Many farmers wish to be able to farm without subsidies, but if the Government is determined to drive down the price of food by flooding our market with cheaper imports, then how do they expect farmers to make a living? The obvious answer is they wish to pay farmers to conserve the land and look after the natural environment and will look to new trading nations to supply our food – a climate-friendly solution I look forward to hearing them discuss at COP26.

Jeremy Clarkson has much to say on the matter and caused quite a stir last week when he compared the Government’s neglect of the farming industry and departure of people from the land to “ethnic cleansing”.

This might seem a distasteful comment, but he and many others are rightly concerned about the future of farming and self-sufficiency in this country and are fed up with their concerns falling on deaf ears.

A tariff-free deal with New Zealand will simply pave the way for unfettered access to our markets to a major sheep and dairy-producing nation, which will be another blow to dairy and sheep farmers in the UK so soon after signing the Australian deal in June.

To make matters even worse, neither deal has been given any kind of proper parliamentary scrutiny, as the Government’s promised Statutory Trade and Agriculture Commission (TAC) has yet to be established.

The Conservatives’ own Neil Parish, chairman of the environment, food and rural affairs committee criticised the Government’s delay in responding to the original TAC’s recommendations, and in establishing a replacement, as “unacceptable”.

The Government is blatantly ignoring the input of British stakeholders – not exactly a shining example of democracy.

It is baffling how out of touch the UK Government is with farmers and the food and drink businesses of this country. Maybe it is because it has forgotten what it is like to be hungry and is so hell-bent on proving Brexit hasn’t been a complete an utter mess that it is willing for food and farming to be sacrificial lambs in its blinkered pursuit of shiny new trade deals.