Great men don’t make history, said Friedrich Hegel, history makes great men. Never has that been more true than in the case of Winston Churchill. He was an outsider, a failure, a drinker who was casually racist. An imperialist who thought the English-speaking peoples were destined to civilise the world. He had an almost megalomaniacal sense of his own destiny, as he recounted in voluminous self-serving accounts of his time as a war leader and statesman.

Churchill’s character flaws, vanities and failures of statesmanship are exhaustively examined in this latest revisionist history of the Great Man. It is a highly readable account of his many foibles and peccadillos, as is to be expected from Geoffrey Wheatcroft, a journalist and former gossip column editor. There is very little here that is new, and Churchill’s Shadow doesn’t pretend to be a work of scholarship. It is a character assassination of a politician who didn’t really have much of a character left to assassinate. 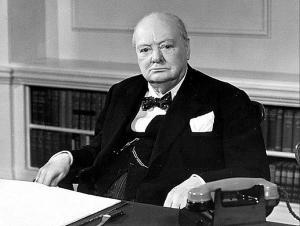 John Maynard Keynes exposed his failures as a Chancellor of the Exchequer, a century ago in The Economic Consequences of Mr Churchill. Churchill’s standing as a war leader has been attacked for even longer than that, since his disastrous Gallipoli campaign in 1915. He has often been accused of callous disregard for human life in sanctioning the bombing of Dresden during the Second World War. His contempt for Muslims undoubtedly bordered on Islamophobia.

The left has always loathed Churchill because he fought against the miners in the General Strike and was a militant opponent of the Russian Revolution. But the Tory right hated him for being a “cad”, a “rascal”, a disrespecter of convention and a class traitor. Many of Churchill’s Tory contemporaries were instinctively anti-Semitic and couldn’t understand his passionate concern for the welfare of the Jewish people.

Yet, for all his many faults, and his many enemies, he still emerges – even in Wheatcroft’s demolition job – as a figure of historic importance, if only because he was in the right place at the right time. That was after 1939, when the policy of appeasing Hitler collapsed after Munich and Churchill was thrust by history into the role that was to define his long life: leading Britain in a lone stand against Nazism. Even Geoffrey Wheatcroft concedes that Churchill was the “saviour of his country” through his “courage and indomitable will”.

It was in Churchill’s words, as much as his actions, that he achieved greatness. For a time, words were all that Britain had, as the French army collapsed before the Wehrmacht and the British Expeditionary Force was expelled from Dunkirk in 1940. He turned that epic military defeat into a kind of victory through sheer force of eloquence. The American broadcaster Edward Murrow said Churchill “mobilised the English language and sent it into battle”.

It wasn’t all hot air. Churchill refused to strike any deal with fascism despite urgings from the British political establishment to take Britain out of the war and let Hitler and Stalin fight it out between them. Churchill was thus arguably the greatest anti-fascist of the 20th century, and the most militant democrat even though he famously described democracy as the worst form of government “apart from all the others”.

So it is regrettable that Geoffrey Wheatcroft tries to portray Churchill as a closet fascist. He even suggests, with no evidence, that Churchill was “our own Mussolini”. Churchill was utterly opposed to Oswald Mosley’s blackshirts and was a lifelong opponent of anti-Semitism. Wheatcroft says that he supported the Jews because “Zionism is a colonial enterprise” which appealed to Churchill’s imperialism. You could get thrown out of the Labour Party for saying that.

He goes on to claim that there was “an uncanny affinity between Churchill and Hitler”. This is because they were both “fervent nationalists … who believed in the superiority of some races over others”. This is the specious Twitter logic of guilt by association – every nationalist is a fascist because Hitler was. Wheatcroft also drags in Churchill’s early support for eugenics. But he took social Darwinism not from the fascist right, but from left-wing icons like Sydney and Beatrice Webb and HG Wells, who had fallen for eugenics long before he did.

In reality, Churchill had no affinity with or for fascism. He repeatedly called fascism “a monstrous tyranny … a new dark age made more sinister by the lights of a perverted science” and not just in wartime propaganda. He was one of the first politicians to recognise Nazism for what it really was: a ruthless philosophy of racial hatred.

Two months after Hitler took power in 1932, when many in the British ruling classes were flirting with National Socialism, Churchill warned the Commons about “the tumultuous insurgency of ferocity and war spirit, the pitiless ill-treatment of minorities, the denial of normal protection of civilised society, the persecution of large numbers of individuals solely on the grounds of race”. Wheatcroft actually quotes that speech, which surely makes a nonsense of the suggestion that Churchill was a fascist fellow traveller.

Calling Churchill a fascist is the kind of juvenile slander we heard from the iconoclasts who defaced the Churchill statue in Parliament Square during Black Lives Matter protests. The Scottish Green MSP, Ross Greer, created a Twitter storm two years ago by accusing Churchill of being “a mass murderer” responsible for the deaths of millions in the Bengal Massacre of 1943. Actually, Wheatcroft quotes the Bengali economist, Amartya Sen, saying that there was no actual food shortage and that the famine was caused largely by hoarding, profiteering and distribution difficulties.

Wheatcroft repeatedly excoriates Churchill, rightly, for using abusive language during the famine and for calling Mahatma Gandhi “a half naked fakir”. Mind you, anti-racism campaigners recently organised a petition denouncing Gandhi as a “fascist, racist and sexual predator”. These days, no historical figure is exempt. The left’s hero Franklin D Roosevelt was arguably a greater racist than Churchill. Not only did he tolerate the anti-Semitism of his wife, and the denial of civil rights in southern states that elected him; he also condoned the US army being segregated on racial lines.

I found myself almost sympathising with Churchill after wading through Geoffrey Wheatcroft’s epic charge sheet. That’s the trouble with hatchet jobs – you start to look for balance. In one important respect, Churchill was a progressive reformer and a social liberal far ahead of his time. With Lloyd George he helped lay the foundations of the Welfare State, with pensions and social security. It was Churchill, not Attlee, who announced the National Health Service in 1943, as Wheatcroft points out himself. During the war he took time to argue against the unspoken rule that people who spoke cockney could not become naval officers.

He was an imperialist, but so were most people in the days of the British Empire. Churchill first became an MP under Queen Victoria. He is a product of a bygone age who fought in a cavalry charge. Geoffrey Wheatcroft says that it is a mistake to indulge in “presentism: judging the past through today’s eyes”. Perhaps he should have listened to himself.