A new book explores one man’s fascination with snow patches 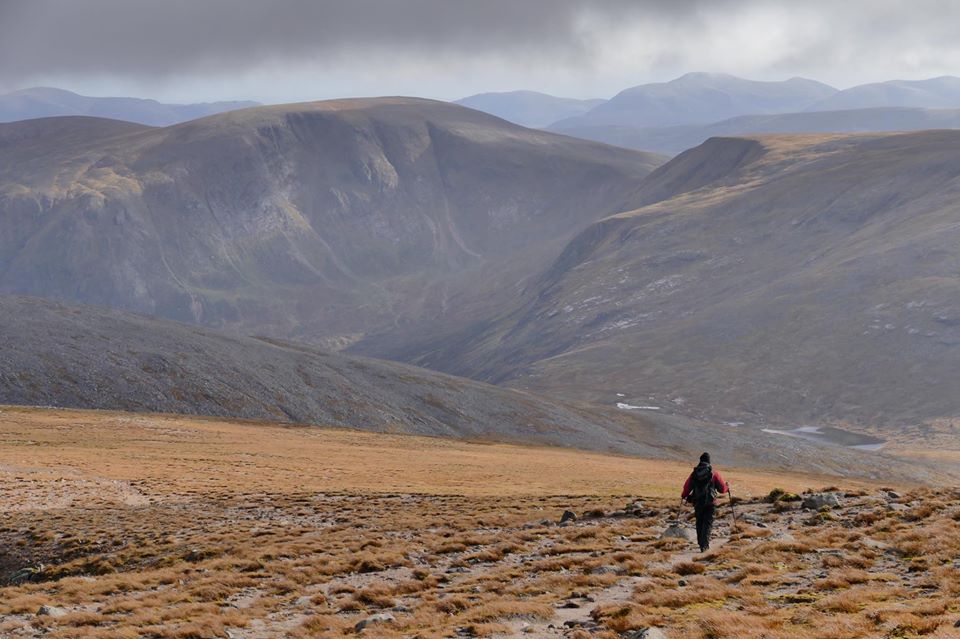 It was a clear and beautiful May morning, and Iain Cameron, aged nine and recently moved into a new Port Glasgow home with his family, was on the brink of a lifelong obsession.

The house sat at the top of a housing estate, the highest street in town and 500 feet above the Firth of Clyde with a view that stretched from Erskine to Dunoon.

On that particular day, a flash of brilliant-white caught his eye. Clinging to what he later discovered was Ben Lomond’s south facing slope, was a relic of winter past.

While other young lads might become obsessed by football or cars, Iain soon became hooked on something far more fleeting – snow.

Much later, bizarrely, his unusual hobby of hunting for and recording the nation’s snow patches would lead to a hair-raising episode and with a well-known comedian’s life hanging in the balance.

And it would lead to him forging a bond with Mabel and Olive – the world’s best known Labradors.

Before then, however, he would become known as Scotland’s ‘snowman’, with a fascination for icy strips of winter snow lurking in hard-to-reach mountain gullies which, even as the summer sun beats down, survive.

In recent years snow patches which once could be relied upon to cling on through the warm summer months and in some cases harboured decades old snow, have repeatedly been lost; casualties, it’s believed, of the changing climate.

At Garbh Coire Mòr on Braeriach in the Cairngorms, the Sphinx and Pinnacles patches, named after the rock climbs that overshadow them, are the most significant barometers of change.

Traditionally Scotland’s most durable snow patches, over the past few years they have regularly succumbed.

Iain, who has now written a new book reflecting on his search for Scotland’s dwindling snow patches, has doubts that they will make it through this year.

“They’re both pretty thin this year,” he says. “I don’t hold a huge amount of hope for them.

“They way they’re looking just now, I think they will be doing well to reach the end of September.”

Other patches which used to survive the summer months, such as on Aonach Beag at Forth William and Ben Nevis, are also said to be struggling.

It raises the prospect that snow will again completely disappear from Scotland’s peaks this summer, a situation that until recent years had scarcely occurred in 300 years.

“It was a good winter in terms of snowfall,” says Iain, who began keeping records of Scotland’s snow patches when he was a teenager, and who now contributes his findings to the Royal Meteorological Society’s Weather journal.

“Although it looks pretty, it is poor for filling up the locations that hold the longest lasting patches.”

Chasing Scotland’s snow patches may seem an odd hobby, yet Iain reveals in his book, The Vanishing Ice, that summer snow patches have always captured interest.

His research led him to 17th century poet, John Taylor, who wrote about ‘Phoebus flames’ being unable to melt the snow that lay on the hills around Braemar. Echoes of the legend remain in the local story that the Farquharsons of Invercauld, major landowners in the Braemar area, would lose their lands if the snow that sits on Beinn a’ Bhuird – known as ‘the Laird’s Tablecloth’ ever vanishes.

While these days the Laird’s Tablecloth almost always vanishes in summer, the legend suggests locals were used to seeing Beinn a’ Bhuird with its icy streak at the height of summer.

Snow patches were also recorded by travel writer Sarah Murray, who penned a vivid description of encountering snow at Ciste Mhearad close to the summit of Cairn Gorm, in early September, 1801.

And in 1835 Rev. Donald McGillivray wrote of how the “deep clefts on the north-east side of Ben Nevis are never without snow”, adding that it was of “great service to the salmon-curers”.

The snow would be retrieved by peasants who would climb the cliffs of Ben Nevis to pack it into panniers carried on the backs of small, hardy horses.

The challenge to collect the snow would have involved conquering testing terrain on the north-east face of the mountain, covering greasy and unstable rock liable to give way at any time.

“On foot the snows are hard to reach, even today where a good footpath has been constructed between sea level and the refuge at 2,200 feet,” Iain adds. “In the early 19th century, taking ponies up rough ground to above 3,000 feet must have been a significant and risky undertaking, necessitating the best part of the day to get up there and back.”

The significance of the vanishing snow and Iain’s determination to record it has gathered an army of supporters who flood his social media and emails with photographs that record the snow patches they encounter.

Among those to show interest was BBC commentator Andrew Cotter, whose lockdown viral videos made Labradors Mabel and Olive worldwide stars. They are now regular hiking companions, with the younger Mabel typically bounding ahead on fruitless pursuit of mountain hares, while the wiser Olive simply watches.

Not all outings are straightforward, however. And one well-known comedian’s curiosity over what drives Iain to record snow patches almost came to a sticky end on a Cairngorm’s slope.

Having posed for photographs, the decision was made to return via Pinnacle’s Gully, a tricky route made more challenging by its constantly changing melange of splintered rock, moss, grit, boulders, and a chockstone at the top which blocked the route.

Having successfully scrambled up, Iain waited as Byrne tried – unsuccessfully – to follow.

“There was no possible way of going back down, for to do so would be akin to signing our own death warrants,” Iain recalled.

Faced with the embarrassment of having to call Braemar Mountain Rescue for help, he opted to wedge his foot into a crack in the granite, stick his other against the chockstone and yank him up.

A slip, Iain notes in his book, could have led to the direst of outcomes.

“It was a bit hairy. Ed is a good hillwalker but scrambling up a decaying gully is another thing altogether,” Iain recalls.

“But we got there in the end. All’s well that ends well.”

The Vanishing Ice: Diaries of a Scottish snow hunter is published on September 2 by Vertebrate Publishing.