As Sturgeon, Johnson and Starmer go head-to-head in Scotland who will be victor? 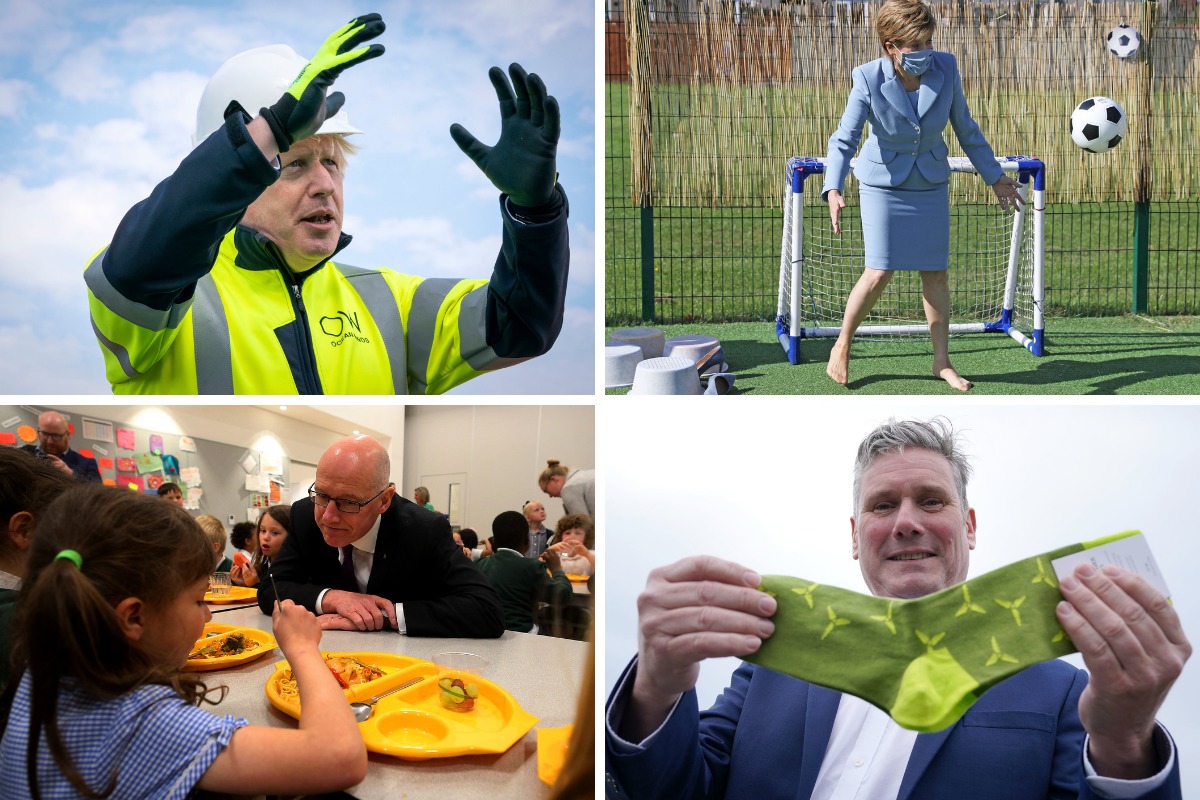 THE sun is shining today in Glasgow as we welcome you to Day Two of the Try-athlon.

In this event, after putting in years of training, the public require Olympic level patience, as a series of chancers try to vault ahead of each other in the polls.

Excitement is building ahead of today’s action as the nations go head to head, putting forward their best multi-eventers, each hoping to take home the most impressive reputation boost.

Opening today’s games is an event new here in Scotland, the vertical drinking competition. Usually a team sport, the home nation is the only country fielding a contestant in the discipline.

And here he is, John Swinney emerging now, pausing briefly to dip his hands in the resin bowl, giving his palms a good dust.

He’ll be wanting to make sure his grip is slip-free, one small drip or spill could cost him dear. Limbering up now. Working those wrists back and forth, he looks as confused as the licensed trade, who weren’t aware this sport existed until yesterday.

Unfortunately for Swinney, vertical drinking venues, despite 15 months of preparations, aren’t allowed to open until next week. Organisers at the games here approached several local schools to see if their gym halls were available but we understand there was no response. So here he is, live over Zoom from his living room.

The ultimate aim here, as we know, is to move from vertical to horizontal as quickly as possible. There he goes, the first sip. Technically masterful, this will take some beating.

He goes for the velvet pursestrings, straight into a jacked up flummox and moves on to a rapid mango. No one knows what any of it means but we’re hoping for clarification at some point before the scores come in.

And… we’re going to cut now to the thick of the action. The reigning champion, Boris ‘Bunter’ Johnson is going head to head with Nicola Sturgeon in the synchronised snubbing.

Sturgeon has had a stellar run so far and the reigning Scottish champion made the perfect start, with a pre-emptive strike on Bunter.

It was a deft play: She extended an invitation, she knew he wouldn’t accept, he was hoping to make headlines in this away fixture but once again she’s outmanoeuvred him.

Always one step behind, Bunter’s looking tired. Strategy is failing, can he retake the initiative?

He’s heading straight to Fife. There’s not much left in the tank here as Bunter makes awkward small talk with police officers.

Meanwhile, Starmer is going all out for the red team and taking his campaign to a windfarm. It’s a decent tactic. Not much artistic merit but he’s always been better at the bar. Points deducted for a literal interpretation of the theme but it’s a win over Bunter.

But wait. Oh! Bunter’s taking it next level in a last second defensive play. Could it be? Yes! He’s going offshore. He’s going to an offshore windfarm. Think of the photo ops.

He’s outflanked the opposition, and inching ahead now, Starmer’s medal chance slipping away.

Hang on. What’s this? Oh no, oh no… they’re letting him talk. What are the coaches thinking? This is a grave tactical error from Team BJ.

He’s speaking. This won’t end well. Groans from the audience as he praises all-England title holder Maggie Thatcher for closing coal mines and causing misery across the country. It’s a outrageous attempt at back-spin, but it’s fallen flat.

Starmer’s back in the lead now seizing the opportunity to score easy points with some pious chiding. He’s getting digs in left, right and centre with very little to stop him.

And Sturgeon’s back in the race now. We saw her yesterday playing with children at a nursery school. Shoes off, like Zola Budd, winning the fans over with some banter with a passing toddler. Points lost for lack of originality but the crowd are on her side.

This is the race of her life and she’s trying to dictate the field of play, bringing her cause to the top of the agenda in front of a home crowd. She won’t give it up easily and yes, she’s joined in the Bunter chiding. Always a crowd pleaser.

Who’s that at the back? He looks like he’s mouthing something. Could it be a late entrant? Is he telling the other contestants to “F*** off”? It looks like Alex Cole-Hamilton, in the one-man race.k,l

Cole-Hamilton, there, making a surprise appearance in a South Queensferry gym, on a weights machine. Showing off his muscular unionism here but is anyone paying attention?

Someone wants to rent his shed from Air BnB, we’re being told. It’s not enough to keep the crowds happy and we’re back to the three big teams, going head-to-head now.

What’s Starmer going to do about the future of his team in Scotland? He’s not a team player, he’s telling the judges firmly. No coalition come election time. A canny move. And what’s this, he’s also challenging Sturgeon’s squad on their progressive credentials. Nice.

Starmer’s made an impression. He’s on the podium. Could this be a comeback for the beleaguered side? It’s too early to tell if this is going to be a shake up but it’s been a game with few fouls, which is more than can be said for his opponents.

Sturgeon is still top of the leaderboard but she’ll be hosting the competition again before long, and she’s going to need the run of her life.