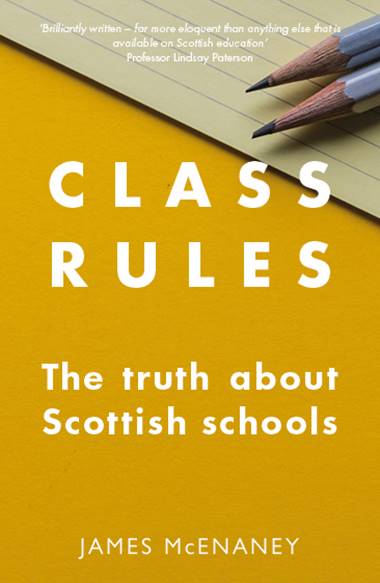 A few years back, when exiting a talk by a university-based education expert, I asked a battle-hardened primary teacher for her impressions. “See they experts?” she said. “They wouldnae last tae playtime wi’ ma P5s.” I don’t know how James McEnaney would fare in my colleague’s P5 test. She might well question the Class Rules author’s front-line credentials: three years teaching experience at Arran High School and subsequent service as a college lecturer. She certainly wouldn’t question the ambition underpinning his book, subtitled The Truth About Scottish Schools. Like an educational Captain Kirk, McEnaney aims to boldly go and “finally do what no-one else would: tell people the truth about Scottish schools”. He promises: “I am going to help you cut through the endless political grandstanding, media misrepresentations, statistical releases and pernicious class-based assumptions that obscure so much of Scottish education.”

It’s not entirely clear who is being helped to do the “cutting through”. Nevertheless, as befits an English specialist, James McEnaney’s communication skills allow him to address complex issues, making them accessible to both professional and lay audiences. For example, he succinctly and convincingly describes the abuse of educational data to obfuscate rather than illuminate; reminding readers of Disraeli’s maxim on “lies, damned lies and statistics”. Publication is well timed; Class Rules arrives exactly 50 years after Ivan Illich’s De-Schooling Society. McEnaney is less of an iconoclast than the Austrian author; he doesn’t reject schools or necessarily perceive them to be anti-learning. Nevertheless, he sets out to deconstruct the economic, social and above all, political and administrative structures that he claims limit schools’ effectiveness and fail a substantial proportion of Scotland’s young people.

As McEnaney suggests, it’s children from Scotland’s poorest families and communities that get the roughest deal. Those of us who spent substantial parts of our careers working in Scotland’s most deprived communities, will be underwhelmed to learn that “attainment follows affluence and pass rates map postcodes”. To be fair, McEnaney’s perspective of the attainment gap goes far beyond examination data, taking account of gender, ethnicity, remoteness and additional needs. It’s not all doom and gloom. He recognises the many good things happening in schools and classrooms up and down the country, but still describes a system that is “both in need of and ripe for radical, even revolutionary reform”.

Curriculum for Excellence (CfE) was a missed opportunity. Its transformative potential was bogged down and finally swallowed in a morass of conflicting detail and bureaucracy. The chance to provide teachers with greater flexibility and autonomy was wasted, as they were lost ever more deeply in a forest of Experiences and Outcomes. Put crudely, teachers couldn’t see the wood for the trees. McEnaney is in no doubt that responsibility for that and other current educational ills and injustices lies with Scottish politicians and pillars of the educational establishment such as Education Scotland and the Scottish Qualifications Authority (SQA). Education Secretary John Swinney and First Minister Nicola Sturgeon in particular, are accused of “weaponizing” education for political advantage. Education Scotland and the SQA stand accused of prioritising damage-limitation to their own embedded positions. Scotland’s young people and teachers have become collateral damage, particularly during the pandemic-induced examination and certification meltdowns of 2020 and 2021.

Politicising education is nothing new. It’s almost quarter of a century since Tony Blair made his famous (or perhaps infamous) pledge on “education, education, education”. There was nothing inherently wrong with Nicola Sturgeon asking to be judged on education and her success in closing the attainment gap. She was guilty of misunderstanding, not necessarily misrepresenting. She and her advisers didn’t understand the depth and complexity of the question, let alone the answer. As with Blair before her, Sturgeon’s soundbite was a hostage to fortune and has proved to be the gift to political opponents that just keeps on giving.

Unlike those opponents, McEnaney offers a wide range of constructive strategies to, ahem, “build back better”. He rightly places teacher knowledge, skills and commitment at the heart of change and improvement. In Finland for example, where there is less control-freakery, teachers are empowered to develop and modify the curriculum to better match the needs of pupils and communities. McEnaney also places teacher judgement at the heart of a revised system of assessment and certification. That, of course, can be a double-edged sword. Teachers’ judgments are far from infallible and there are significant workload implications.

Litigious parents are a further hazard, especially should the child next door receive a better award. Nagging doubts remain about the readiness and willingness of teachers and the system in general to fully embrace the transformative intent of some of McEnaney’s “radical even revolutionary reforms”. Systemic conservatism and inertia should not be underestimated. There’s more than a grain of truth in the old joke that if a Scottish Rip van Winkle awoke today, the only thing he would recognise would be the secondary school curriculum.

Parents, too, tend to be cautious about change, particularly those who prospered under the status quo and wish their offspring to do likewise. McEnaney would like to see greatly increased teacher numbers, reduced class sizes, more non-contact time for teachers, more technology, school entry deferred until age six or even seven, a national kindergarten system, Gaelic promoted and generally a broader curriculum offering greater access to the arts and outdoor learning.

Wouldn’t we all? Unfortunately, McEnaney doesn’t say how his wish list relates to other “build back better” priorities such as the NHS and social care, or how it should be funded. The proposed kindergarten system would be “massively subsidised or entirely paid for through general taxation”. Mm.

Towards the end, McEnaney asks the fundamental question: what (and possibly, who) are “our schools, and our education system, actually for?”. It’s a question that might have been asked earlier, as it’s the starting point for the debate urgently needed in our schools and beyond. If James McEnaney’s thoughtful and readable book helps stimulate that debate, it will have made a valuable contribution.