From One Dove to nature cure: The return of Dot Allison

FINALLY. It is the summer of 2021, and we have a reason to talk to Dot Allison again.

It has been 12 years since we last heard from her. Gordon Brown was still Prime Minister when her last album, Room 7 ½ came out. The world has changed in the meantime. So has Allison’s life.

But today is June 17, and she’s making music again. Indeed, she is just returning from a recording session at Castlesound Studios in Edinburgh when I call. She’s currently working on a score for a TV show with Anton Newcombe (formerly of the Brian Jonestown Massacre) and today she’s been recording cues.

“I was building a rhythm out of my breath,” she says of her day’s work.

Very Dot, you might say. Since she first emerged as the front woman of Glasgow’s best blissed-out, dubbed-up and loved-up (but heartsore), Andrew Weatherall-endorsed band One Dove, Allison has followed her own meandering, idiosyncratic path. She’s written songs with the late Hal David, worked with the likes of Paul Weller and Pete Doherty as well as Massive Attack and Death in Vegas, and made a number of solo albums that have ranged from the cold blue electronica of We Are Science to the psych-folk of Exaltation of Larks.

But that was then. The obvious question is where has she been of late? Being a mum, she explains. “I just didn’t want to be away from my kids really. That was just the priority, I guess, my children.”

Allison married the composer Christian Henson in 2011 and moved back to her home city of Edinburgh from London to raise her family in 2015. As a result, music took a back seat for a while. And even when she started thinking about writing new songs it didn’t always come naturally. “Once my daughter was about three, I did a day here or a day there, and, even then, I struggled a bit,” she admits.

Did you ever think that part of your life might be over, Dot? “I thought it might be. We’d moved up. I always thought, ‘I’ll keep writing with people up here.’ But then at one point I definitely did think, ‘Oh gosh, I might have accidentally cut off all my contacts that I’ve built up over all these years.’

“But then it’s just funny how life finds its own way. Through an old school friend here I connected with some folk musicians and then it was just a very natural process.

“I guess the ideas don’t stop coming and if you’re still playing you just end up finding people. That’s what’s happened. I just stumbled into it.”

Read More: The birth of Bunnymen

The result is her first album since 2009. Heart Shaped Scars is a beautiful, bruised collection of folk songs, broken hearts and birdsong, an album that provides a lush, soft, slow backdrop to Allison’s unique voice, all breath and high notes.

It’s an outdoors album, one that moves through the seasons. I can detect the ghost of Vashti Bunyan in its grooves. (Others hear the influence of Linda Perhacs and Karen Dalton.) And for all the heartache and pain in the lyrics, these songs also embrace the consolation of the world around us. As one of the best tracks on the album asks us, Can You Hear Nature Sing?

Ask Allison about this aspect of the album and maybe you hear echoes of the biochemistry student she was before music took over.

“I’m quite interested in science,” she says, before enthusing about field theory and wave particle duality and, in particular, the idea of quantum entanglement.

“When you get murmurations of starlings,” she says, “they move in a synchronised pattern. From a physics point of view, you would say that is linked to entanglement because they are not telling each other where they are going. They know.

“I think sometimes we as humans don’t really know what we don’t know. And I think the mind of nature – whatever level of consciousness is going on – is this natural flow. I think there’s a lot we can learn about just watching and listening and not being too prescriptive. We’re part of that.”

The album sees Allison collaborating (and sometimes swapping harmonies) with folk singers Amy Bowman, whom she met at a party in the Hebrides, and Zoe Bestel. The composer Hannah Peel also contributed string arrangements.

Although it wasn’t a deliberate act, you wonder if it made a difference to her working with predominately female collaborators for a change.

“I think it probably did. I think you can unconsciously hold back because you’re totally outnumbered sometimes or be a little bit more tentative about your experience.

“I’m naturally quite shy and a bit sensitive and I can lose my voice sometimes with overbearing characters. I don’t flourish necessarily in those environments.”

It is now nearly 30 years since Allison came to our attention with One Dove. How does she measure the distance from the 22-year-old she was then and who she is now?

“I think I’ve got a lot more courage in my own convictions now than I had then. Part of that is just experience, and part of that is growing as a person.”

The world has changed too, she points out. “Even thinking back to the 1990s there was quite a lot of everyday sexism and that ambient environment of presumption about who does what.”

She recalls her days working with Ian Carmichael and Jim McKinven in One Dove. “I remember we all had to pitch songs to a group of producers, and they chose one of the songs to do from the band. It was my song they chose and they looked at the two guys. It’s that kind of thing. You just accept that that’s the way it is. You get discounted.

“It does feel like that’s a bit different,” she says of the present moment. Thankfully.

And to be fair, not everyone discounted her back then. We talk for a moment about the late Andrew Weatherall, who co-produced One Dove’s only album Morning Dove White and did so much to encourage Allison in her early days.

She was devastated by his death in February last year. “But, God, what a contribution to art. I feel really grateful for everything he gave me. Because he did champion and mentor me, really.”

He was such a generous man, she says, recalling how he would make up cassettes of music for her.

“I listen to my own body of work and think, ‘Oh God, they were really the roots, the mycelium.’ There’s a network of influences that nourished my work, so I’ll always feel very grateful to him for that, because the music he put onto these compilations for me certainly did have an influence.”

The last time she saw Weatherall was in 2019 when he played a gig in Edinburgh for Neu! Reekie! The singer Denise Johnson was also there that night. “And she’s gone as well,” Allison laments.

“It was this really cool night. Andrew was doing a reading over music and Denise was singing. 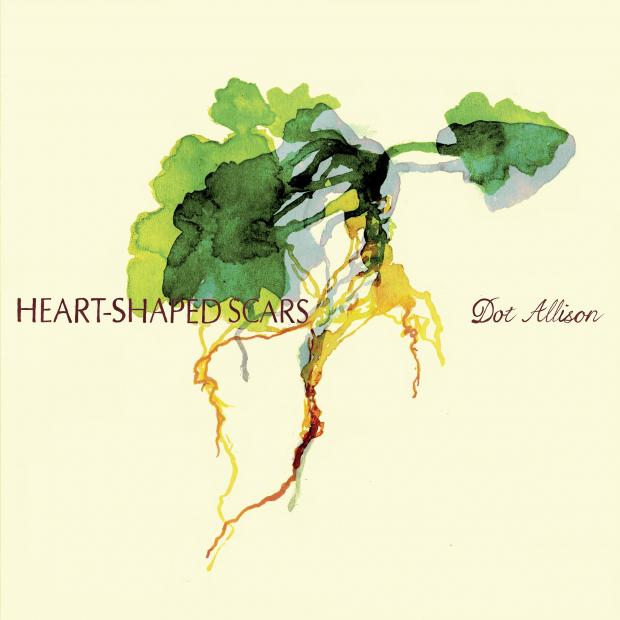 “I had already thanked Andrew because I’ve always felt indebted to him. And I felt compelled to thank him again in 2019 when we all caught up at Neu! Reekie!”

We are all the sum of our influences and our experiences, good and bad. Dot, I say, Heart-Shaped Scars is an ache of an album full of tears and pain and love. How’s your own heart holding up these days?