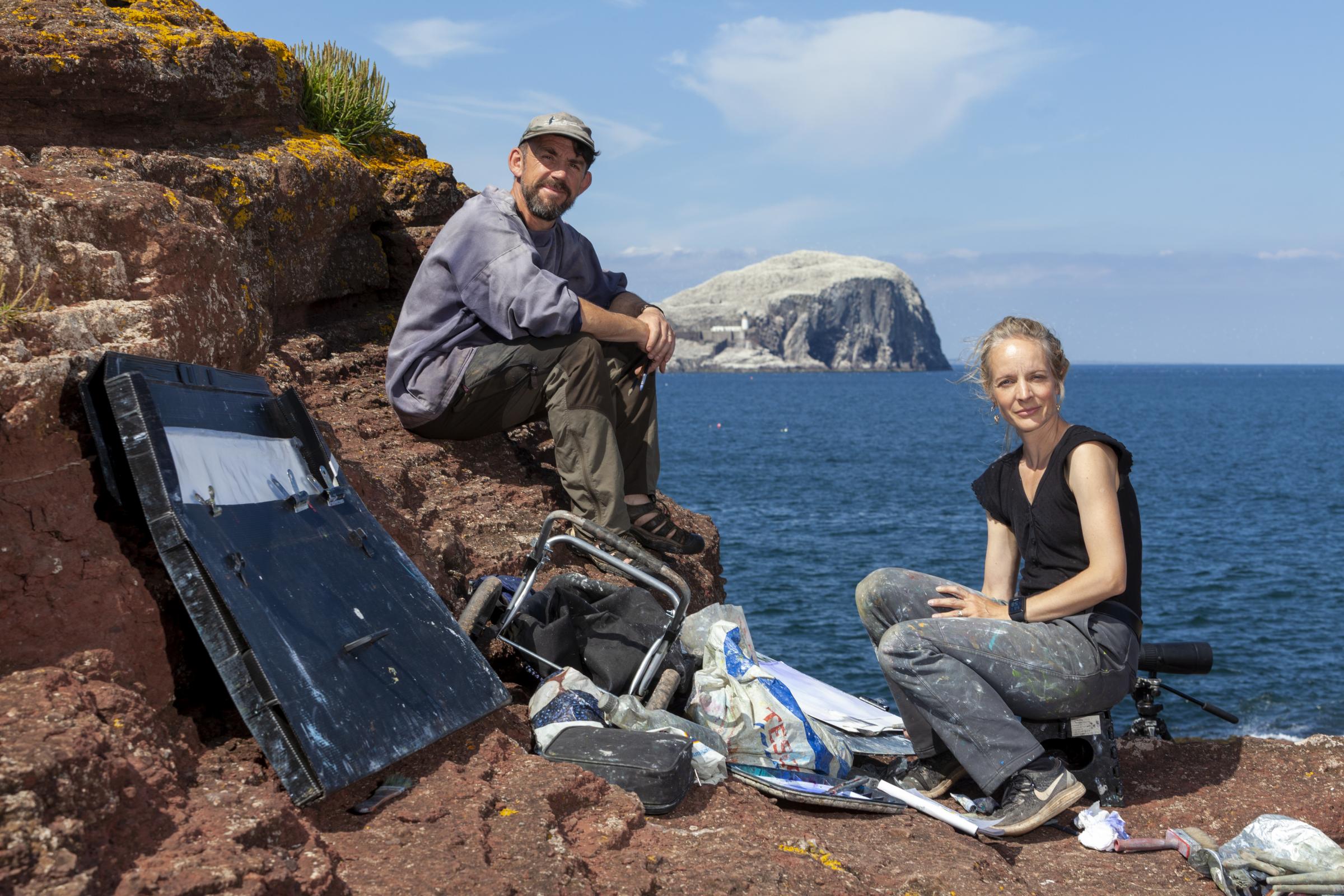 It is one of the most iconic visual images of the Firth of Forth – the Bass Rock, glistening white in its summer plumage of guano from the hundreds of thousands of birds that nest in its cliffs and crevices.

Perhaps most closely associated with gannets, being one of two major gannet nesting sites on the east coast (the next is down in Yorkshire, although the Bass Rock has become so popular that those birds unlucky enough not to find a spot are now nesting at St Abbs Head, as if those high cliffs are the overflow parking for the Bass Rock festivities). It is visible not just from many locations on the south coast of the Firth – and from far inland too – but also the north.

In season, and in the right light, the brilliant white specks of the gannets can be seen circling around it, as if the rock itself were the centre of some outsize snowglobe. This wide visibility of the rock was part of gallery owner Alan Rae’s thinking when he had the idea of mounting a group exhibition of ‘portraits’, as it were, of the Rock. “I live near the Bass Rock. I see it every day,” says Rae.

“And I think, even when you do something apparently corny like asking artists to paint the Bass Rock, when you put it in a room, all the different slants that are put on it, it’s always fascinating. It is a portrait of a rock.”

Originally envisioned as a six-artist exhibition, with six very different artists creating ten works each, putting their own style on to it, Rae had to change plans when Covid restricted movements and some of the artists, such as Darren Woodhead, who’d been planning to paint from a boat next to the Rock, and Dominique Cameron, who had been intending to land on the Rock, were unable to work as planned.

“So we rowed back a bit. They’re all providing just two or three now, and I’ve invited a lot more artists.”

And Woodhead has, with restrictions lifted, now been out painting gannets, capturing them in the moment of flight, of feeding, his watercolours painted “en plein air”, as he and his wife, the artist Pascale Rentsch, also exhibiting her own land-based view of the Rock here, always do. The artist couple have a past that is perhaps rather more entwined with the Rock than most, having met on the John Busby Seabird Drawing Course, which involved a boat trip to the Bass Rock, in North Berwick. “We’ve been going on it most years since then,” says Woodhead, who now runs the drawing course with Rentsch since Busby’s passing six years ago. “It forms a huge part of our summer.”

“What I really like is how the Bass is seen from so far away,” says Rentsch, whose “messy” – as she puts it – way with laying out her paints and equipment when painting outdoors, and her paint-spattered clothes, once had a concerned passer-by asking if she had a home to go to.

“You know instantly from its silhouette that it’s the Bass. I like how he sits in that sea…a mighty rock. In my work, the Bass for me is in the background, and what is around it, makes it – the light, the flowers and vegetation. Wherever you are, you see it slightly differently.”

“It’s such a different place, such a magical place, it’s overwhelming,” says Woodhead, who tells me he landed there for his 50th birthday this year, taking his children for the first time. “It’s so exciting, even approaching it… It is a sentinel, like a guardian of the Forth.”

Landing is now restricted – in 1996, when they were on the drawing course, it was possible to take a picnic and go and sit round the back, looking over to Fife, he says. “Now you can only go up to the chapel.”

It is also a rock replete with history, from the chapel to its distant days as Scotland’s answer to Alcatraz, as alluded to in the work of another painter in the exhibition, Neil MacDonald, who became fascinated with the flight of 18th century balloonist Vincenzo Lunardi, who, on a visit to Scotland, flew over the Rock and the Forth and had to ditch in the water, rescued – with some luck – by a passing fishing boat.

There are many others here too, from the loose and expressive works of Dominique Cameron to the sgraffito earthenware of Julia Albert-Recht, forming a wide-ranging portrait of a volcanic landmark that has for many centuries inspired writers, artists, historians and naturalists.

Sometimes – oftentimes – in history, it’s the everyday that gets missed, not least in the history of our grand houses and mansions. Not so at Bannockburn House, or at least not this year, with this exhibition of portrait photographs taken by Airdrie photographer Mark Leslie, a man who has become so inspired by the history of the historic building he has been photographing for the past five years that he decided to skim that history over the present-day hard work of its many volunteer staff.

Photographing a variety of house volunteers in historic set-ups, from 1940s landgirls to Rembrandtesque tableaux, Leslie aimed, he says, to capture “the beauty and significance of ‘normal’ people”.

“Sitting for a portrait is something we normally associate with royals or dignitaries,” says Leslie, who works full-time as a support worker for people with disabilities and only returned to photography, many years after graduating in the discipline from Glasgow School of Art, when he had recovered from a head injury that had put him out of artistic action for some time. “But for me the real VIPs are ordinary, hard-working people. I remember meeting Helen, one of Bannockburn House volunteers for the first time. She was cleaning the windows on the landing. As soon as I saw her, I thought I want to take your photo. I remember telling her and her reaction was, ‘don’t be daft’.

Others include volunteers from all aspects of the house’s upkeep, whether in the gardens, in the restoration work or the rooms themselves, all immortalised here in joyous, historic fashion.

Isaac Julien’s 2019 film, The Lessons of the Hour, is here shown in its UK and European premiere in ten screen installation, an interpretation of the life of Frederick Douglass, the brilliant and forward-thinking orator, writer and philosopher who began life in slavery in Minnesota before escaping and writing about his appalling experiences in a series of autobiographical works. Shot and located partly around Edinburgh itself, notably on Arthur’s Seat, with reference to the important time that Douglass spent in Scotland agitating for the abolition of slavery and the emancipation of women, it is a superbly shot series of evocative vignettes and powerful images, threaded through with Douglass’ powerful narrative.