Hundreds of jobs are set to be created in one of Scotland’s most troubled areas for unemployment following an agreement between the owner of the disused Hunterston terminal and a new sustainable energy company.

Peel Ports Clydeport has signed an option agreement with Essex-based XLCC for a 70-acre facility that will create 900 permanent jobs once it goes fully operational in 2024. Assuming the project receives planning permission from North Ayrshire Council, work will begin in April, creating a further 400 jobs during the construction phase.

Investment in the development will be in the region of £370 million, with XLCC possibly seeking government financial support. A further £200m will be required to commission a specialist ship capable of transporting the massively heavy cable reels, with the vessel being shared with a third XLCC factory planned for Wales.

Peel Ports is redeveloping the terminal – which at its peak handled more than 10 million tonnes of coal annually for the likes of Ravenscraig steelworks and Longannet Power Station – into an energy campus helping to deliver on climate change targets. Known as the Hunterston Port and Resource Centre (PARC), Peel Ports has spent £10m on the site’s remediation since it closed in 2016.

XLCC director Alan Mathers said that in addition to the production plant, the company envisions the R&D facility as a “global game changer” in the technological development of stronger, lighter and more durable cable that can be used in deeper waters than is now possible.

“We chose Hunterston because of our requirement for a deep-water jetty able to cope with the huge size of ship needed to transport our cable reels, for its large land space available very close to this jetty, and because Hunterston is already designed as a Port and Energy Hub in local and Scotland’s national plans,” Mr Mathers said.

“But just as important is the fact that the talent we need is available locally, with Hunterston B’s closure in 2023 providing access to people with the sort of transferrable skills we will need.” 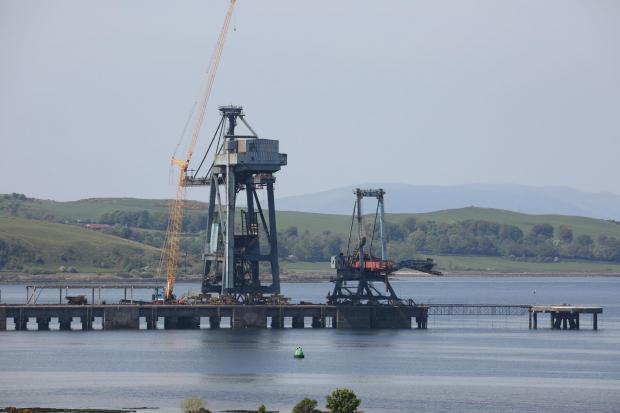 When built, Hunterston was one of the world’s deepest water terminals

XLCC is the first company to publicly confirm its intention to take up residence at Hunterston PARC, though Peel Ports Clydeport director Jim McSporran noted that a further 95 acres are currently under option with other companies whose projects are at various stages of planning permission. A further announcement about an on-site research and development campus, separate from that of XLCC’s, is expected next month.

“Our vision for Hunterston PARC, launched last year, was for the redevelopment of 300 acres to create a nationally significant energy and marine campus, bringing together leading industrial operators, world-class universities and the latest innovators, and to deliver technological advances in areas such as power generation and aquaculture,” he said.

“The technology which is being developed by XLCC would be a game-changer for deep sea renewable energy transmission and certainly falls into our vision remit.

“While the scope of the development would give us an anchor tenant, we are also close to other major deals currently under non-disclosure agreements. Hunterston is a site with a level of infrastructure assets unique to the UK and possibly Europe, and we believe its time has come.”

A three-week online public consultation about the proposals is currently underway, with XLCC hoping to achieve planning consent early next year.

If the project goes ahead, the schedule is for test lengths of cable to be in production by April 2023, with 200 jobs in place at the start of that year. Full manufacturing production is expected to be underway by November 2024 with the remaining 700 jobs in place between May and November of 2024.