It may be pouring… but Scotland has a water scarcity warning

SCOTLAND is on a water scarcity alert with some parts of the country needing double the “normal” amount of autumn rainfall to return water reservoir levels to what they should be at this time of year.

The company said it was “unusual” for it to ask customers in autumn to take “simple steps” to conserve water.

The Scottish Environment Protection Agency (Sepa) says above average rainfall is required to see long-term recovery as a “significant rainfall deficit” has built up over the summer.

Sepa’s water scarcity analysis shows there are no areas of Scotland in “normal conditions” with all of Scotland at least being given an “early warning”.

Parts of the Highlands, north east of Scotland and south have had the driest conditions.
Water is of “moderate scarcity” in much of south-west Scotland and also in the Tweed area, Caithness and the River Ythan’s catchment in Aberdeenshire, according to Sepa. 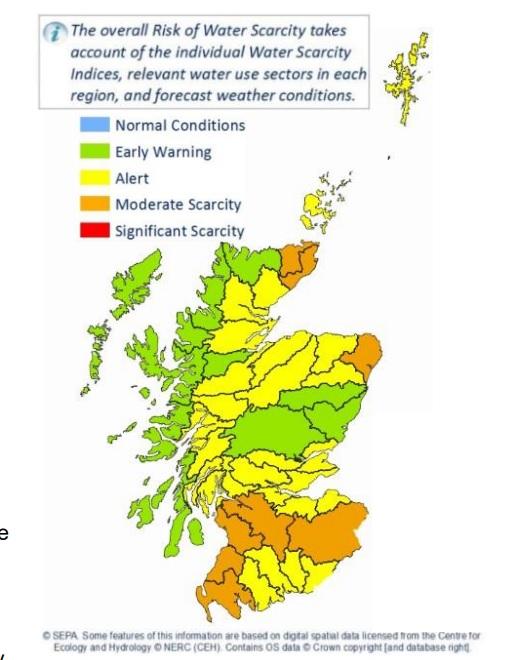 It said in these areas river levels were low and groundwater levels were continuing to fall, with some places “approaching very low levels for this time of year”.

Kes Juskowiak, of Scottish Water, said customers might assume preserving water was no longer an issue after recent rainfall, but he added householders were still being urged not to leave taps running and to use dishwashers and other household appliances efficiently.

He said: “This is an unusual call in the autumn, but we are experiencing exceptional circumstances due to a significant rainfall deficit.

“Hopefully, autumn will bring some respite, but we need heavy and prolonged rainfall to get reservoir levels back up towards normal levels for this time of year.”

David Harley, of Sepa, said there were concerns about water levels beyond the autumn.

He said: “What we are seeing now is the strange phenomena of short-term wet weather against a backdrop of longer term prolonged dry spells, which not only causes immediate challenges, but also concerns for the medium term and into 2022.”

But there is hope as heavy rain and flooding are expected to batter parts of Scotland in the coming days, which may lead to travel disruption.

The Met Office has issued multiple yellow weather warnings in both the east and west coasts of Scotland and have stated that the flooding of homes and businesses are “likely”.

The south-east coast is set to be hit hard today with Dunbar, Eyemouth and Kelso to be hit the worst.

Sepa has also issued flood alerts in Edinburgh and the Borders which has led to police issuing a safety warning.

“This could cause localised flooding.  Surface water could also affect low
lying land and roads.

“There could be difficult driving  conditions. Please drive safely.”

The west coast is set for the same treatment with the yellow warning continuing into tomorrow and Friday.

The extreme weather will stretch  from Campbeltown to Fort William, with Greenock, Oban and Inveraray also in the warning zone.

The Met Office statement said: “Spray and flooding could lead to difficult driving conditions and some  road closures.

“Where flooding occurs, there is a  slight chance of delays or cancellations  to train and bus services.”

The current weather patterns in Scotland are the result of winds
bringing rain up from England which  has been hit with flash flooding and  up to 50mm of rainfall in short spaces  of time.