Barclays has officially opened its new campus on the south bank of the River Clyde in what has been hailed as a major boost to Glasgow’s financial services sector.

The 500,000sq ft facility represents a £330 million capital investment in what the global banking group has repeatedly stressed is a sign of its commitment to the city as part of its network of strategic facilities around the world. Despite the difficulties caused by the pandemic, the Tradeston campus has opened only slightly behind schedule and comfortably within the original goal of housing staff by the end of this year.

Employees from three different locations across the city are transferring to the new facility. Barclays currently employs approximately 3,700 people in Glasgow – an increase of more than 90 per cent during the past four years – and says it is on track for 5,000 staff by 2023.

Chief executive Jes Staley said the campus will give Barclays a competitive advantage and allow the group to attract the best talent to drive business forward. The campus will be home to the bank’s technology, operations and functions teams, which provide support to its consumer, corporate and investment banking activities.

“We wanted to create something transformative that would have a lasting impact on Glasgow, its people and the local economy,” Mr Staley said. “I am proud of the opportunities we have created – not just through jobs, but also through our supply chain and community initiatives.

“The UK is a world leader in financial services and Glasgow plays an important part. With this investment we are increasing the strategic importance of the city to our future.”

The company said it has focused on the use of local contractors where possible during development of the site, with some suppliers scaling up their business because of their work on the campus. Approximately 80 Scottish firms were involved in the project, roughly two-thirds of which were from Glasgow.

Welcoming the project, First Minister Nicola Sturgeon said the campus will be a “fantastic asset”. The facility, plans for which were first announced in June 2018, is located on a site that had previously lain derelict for 30 years. 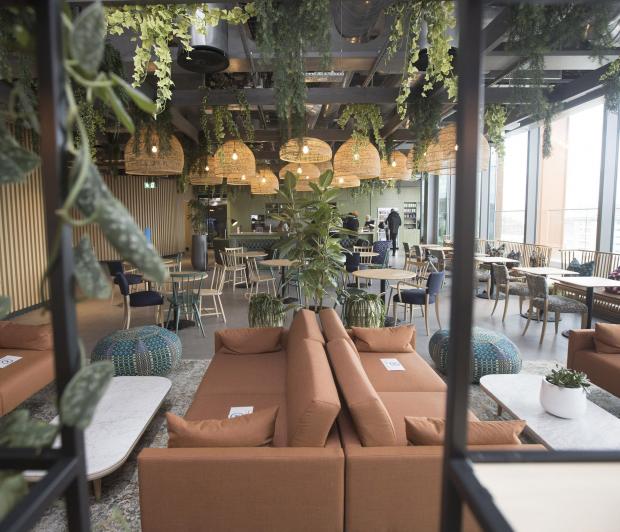 “The opening of Barclays’ Glasgow campus – one of the biggest inward investments to have ever come to Scotland – represents a landmark moment for our country’s thriving financial services industry,” she said. “It is a real statement of confidence in the talent and skills of our people and reinforces Scotland’s status as a global finance and technology hub.

“This campus itself will be a fantastic asset for the Tradeston community and Glasgow. It will contribute to the sustainable regeneration of a historic section of the Clyde Waterfront, and offer employment opportunities for local people and those who have faced barriers into work, including people with disabilities and school leavers.”

The campus comprises five buildings including two listed properties, Clyde Place House and the Beco building. The B-listed Beko building will house a commercial bank branch and offices, plus space for an Eagle Lab to support local entrepreneurs, Barclays’ fourth such facility in Scotland.

The three new buildings have been named Tradescroft, Windmillcroft and Wellcroft, reflecting the industrial heritage of the area.

Other features include a new city centre park, including indoor and outdoor space for community events. A curated space, “The Street”, has been developed for social enterprises and local entrepreneurs to sell their products to the public, with further amenities including wellbeing facilities, exhibition spaces and a street food market.

The UK’s newly-appointed Minister for Scotland, Malcolm Offord, said he was “delighted” that his first visit as a Scotland Office Minister was to see the opening of the campus.

“Not only is there great ingenuity in its design, it also represents an exciting move forward for job creation and economic growth,” he said. “Barclays is bringing thousands of highly-skilled roles to Glasgow and offering unprecedented graduate opportunities for the vast pool of talent in Scotland’s universities.”