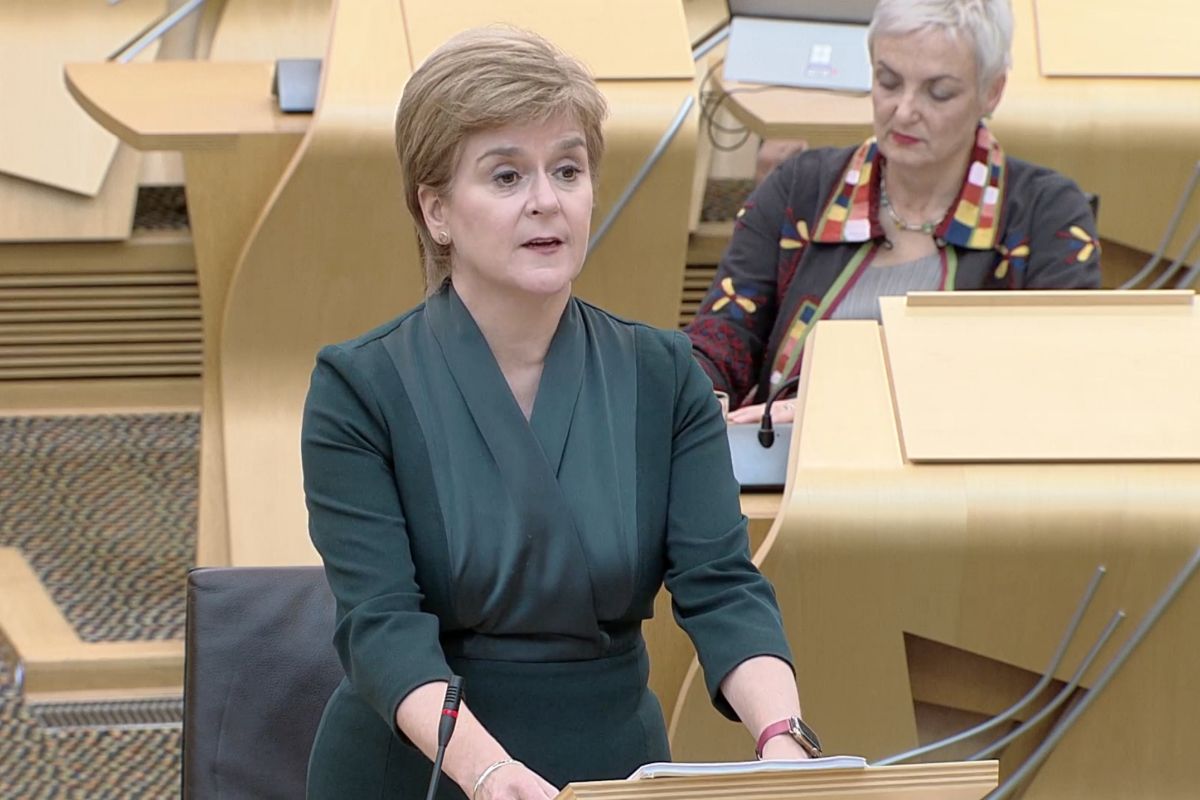 NICOLA Sturgeon has ordered civil servants to restart work on an independence prospectus despite lacking the power to hold a referendum and the continuing Covid crisis.

The First Minister told MSPs the work was needed to give the public a “fully informed” choice on the country’s constitutional future.

The project had been suspended when the Covid pandemic struck early last year.

However Ms Sturgeon did not announce a Referendum Bill for this year, suggesting hard and fast legislation remains some way off.

The anouncement provoked anger from both Unionists, who accused her of focusing on the wrong issue, and critics within the Yes movement, who said she was merely paying lip service to independence while “kicking the can down the road” again.

Ms Sturgeon made the announcement as part of the first SNP-Green Programme for Government, the Holyrood version of the Queen’s Speech at Westminster.

As well as the annual legislative statement, Ms Sturgeon also set out her priorities for the whole of the five-year parliament.

Ms Sturgeon said the Programme for Goverment “reaffirms the Scottish Government’s commitment to a referendum on independence”.

She said: “Our democratic mandate to allow people, not politicians, to decide the country’s future is beyond question.

“And at this juncture in history, it is essential that we consider the kind of country we want to be, and how best to secure it.

“As we emerge from the pandemic, choices fall to be made that will shape our economy and society for decades to come.

“Which Parliament – Westminster or Holyrood – should make these choices?

“And what principles will they be guided by?

“These are questions which cannot be avoided, nor postponed until the die is already cast. So we intend to offer that choice.

“We will do so only when the Covid crisis has passed but our aim, Covid permitting, is that it will be in the first half of this Parliament – before the end of 2023.

“Crucially, we will ensure that the choice – when it comes – is a fully informed one.

To that end, I can confirm that the Scottish Government will now restart work on the detailed prospectus that will guide the decision.”

Boris Johnson has so far refused to grant Holyrood the power to make an independence referendum legally watertight, saying the focus should be on the recovery.

Ms Sturgeon has said that if the UK Government continues to block Indyref2, Holyrood will pass its own Referendum Bill with the aim of holding a vote without Westminster consent.

However the legislation would almost certainly be challenged at the UK Supreme Court, with experts predicting it would be struck down, putting the Indyref2 plan back to square one.

The SNP later updated its own economic blueprint in 2018, with the Growth Commission report written by former SNP MSP Andrew Wilson.

Scottish Tory leader Douglas Ross attacked Ms Sturgeon for putting independence “front and centre” rather than the recovery from the Covid pandemic.

He said: “Nicola Sturgeon has put independence over jobs.

“The focus of her government is on a referendum, not Scotland’s recovery.

“The economy is not front and centre, it’s been shunted aside in favour of a plan to separate Scotland within two years.

“The SNP-Green Government should be pouring all its effort into rebuilding Scotland. Instead, the government will be distracted by desperately trying to build a new case for independence.

“Nicola Sturgeon’s big plan for Scotland’s recovery is a new White Paper for independence, instead of a jobs recovery plan, a real plan to tackle drug deaths, or a proper NHS recovery plan.

“People will watch in frustration, even fury, as the SNP-Green Government takes time and resources away from Scotland’s recovery from Covid, in favour of their usual obsession.

“Scotland’s priorities will be sidelined again by a nationalist government that puts independence above everything else.”

Scottish Labour Leader Anas Sarwar said: “Scotland needed a Programme for Government that recognised the scale of the challenge facing our country.

“Instead, it has got a plan that isn’t good enough, it isn’t bold enough and it won’t do enough.

“We are up against a global pandemic, a growing healthcare crisis, a jobs crisis and a climate emergency – there is no time to waste.

“And this may surprise the First Minister but there are ideas bigger than independence.

“What we have seen in this Programme for Government is just another example of a pattern that defines the SNP’s approach.
“Promise big, never deliver, blame someone else and hope people have forgotten about it when you get round to promising it again. Frankly, Scotland deserves better.”

Alba MP Kenny MacAskill said: “The SNP/Green coalition kicks the Independence can down the road once again.

“The Programme for Government pays lip service to Independence while the First Minister confirmed today that no work has been done on preparing for Independence within Government since the 2014 White Paper when she talked about pressing the ‘restart’ button.

“The 60 seconds dedicated in today’s statement to Independence shows where this Government’s priorities lie.

“The SNP/Green coalition continues to use the Covid Pandemic as cover for not implementing the renewed mandate for an Independence referendum.

“The ‘commitment’ to a referendum by 2023 is not worth the paper it is written on as it is dependent on recovery from Covid.

“Independence is essential for Covid recovery.  If we wait until 2023 for a referendum we are not only giving Boris Johnston a veto over Scotland’s future we are allowing Westminster to make the essential decisions on which Covid recovery depends.”

Pamela Nash, chief executive of Scotland in Union, said: “This is an astonishing insult to the people of Scotland who want their government to focus on Covid recovery.

“To use government resources and revenue on a blueprint to divide communities shows just how out of touch the SNP and Greens are.

“The majority of people in Scotland do not want another divisive referendum any time soon, and want ministers to prioritise the NHS, jobs and the climate emergency.

“Rather than pull people apart, the government should be focused on bringing communities together so that we build a recovery which leaves nobody behind.”

The Programme for Government is the first from a joint SNP-Green administration.

Scottish Greens co-leader Patrick Harvie, now a minister, said: “I’m proud we will lead efforts to lower the emissions produced by Scotland’s buildings, and the increased investment announced by the First Minister will begin that work.

“This programme for government paves the way for a just transition for workers too. This includes the £500 million Just Transition Fund for the North East and Moray, where alternative jobs in low carbon industries are most needed.

“I’m also proud to be leading a new deal for tenants. Our strategy will be published this year and will propose a system of rent controls that will tackle spiralling costs for those in the private rented sector.”