The First Minister has said that Scotland is not currently considering a ‘circuit breaker’ lockdown.

Nicola Sturgeon dismissed reports in the media that claimed a temporary lockdown could be put in place to limit the spread of Covid-19.

She confirmed that some of the speculation in the media is “not accurate” and confirmed that the government is “not currently considering a circuit breaker lockdown”.

Speaking during a Scottish Government briefing, Ms Sturgeon urged everyone to play their part in stopping the spread of coronavirus, urging everyone to follow guidelines and get a vaccine.

She also confirmed that a third of new cases in Scotland are among those who are vaccinated. 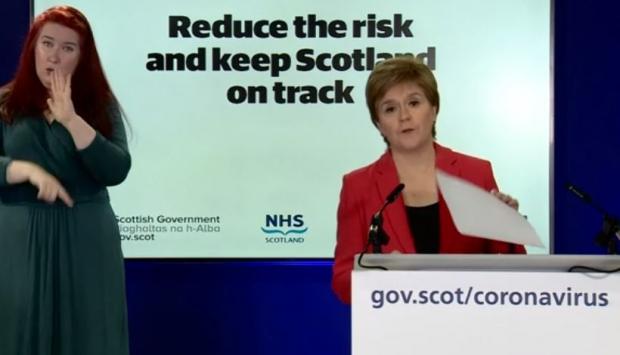 Nicola Sturgeon said that the situation in Scotland remains “fragile” but that there are no plans for a “circuit breaker lockdown”.

She said: “There’s no doubt that the vaccines are allowing us to take a far less restrictive approach to dealing with the virus than we did in earlier stages and we know of course that the measures which have been in place for much of the last 17 months have in themselves caused serious harm, disrupted schools, hurt the economy, affected wellbeing.

“That’s why, even although if we are being responsible, which we must be, we can’t and shouldn’t rule anything out in the face of a pandemic, none of us want to go backwards to even limited restrictions. Of course we can’t ignore the current surge in cases either.”

She said authorities are currently watching closely to see “whether and to what extent we might start to see significant increase in serious illness and obviously in people being hospitalised.”

However, the First Minister stressed: “We are not currently considering a circuit-breaker lockdown.”

Speaking on the sharp increase in cases in Scotland, the First Minister suggested that schools returning earlier than elsewhere in the UK could be a factor in Scotland’s spike.

She said: “In the past seven days we have reported more new cases than at any previous time in the pandemic, although I refer back to my point about higher levels of testing, but case numbers have roughly doubled over the course of the past seven days.

“It’s important to point out that case numbers are rising across the UK just now, but after a period of slower increases in Scotland the rise here is particularly sharp at the moment.

“That is possibly, at least in part, a reflection of the fact that our schools return earlier, with the increased interactions that come with that, and although vaccination has significantly weakened the link between a high volume of new cases and serious harm to health it hasn’t completely broken that link.

“So even if a much smaller proportion of people who get Covid now need to go to hospital, which is the case thankfully, basic arithmetic tells us that a small percentage of a large number is still going to be a significant number of people and indeed in recent days we have seen an increase of the number of people in hospital.

“Last Friday 312 people were in hospital with Covid, today that figure is 479.”

When asked by an STV reporter at the briefing when the country will reach the “tipping point” that will see restrictions being brought in, the First Minister said that the situation on an ongoing and daily basis adding that vaccination has broken the link between the numbers getting Covid and the numbers becoming seriously unwell.

She said the main focus are the “harm indicators”, such as hospital admissions, length of stay and the numbers who end up in intensive care adding: “Thankfully all of these things, on the basis of the case numbers we have right now, are at a much lower level than they would have been earlier in the pandemic, before vaccination.”

It comes as Scotland recorded four coronavirus deaths and 6,835 new cases in the past 24 hours– a record daily high for positive tests in the country.

The death toll under this daily measure – of people who first tested positive for the virus within the previous 28 days – stands at 9,103.

The First Minister urged members of the public to get a Covid vaccine stating that the effectiveness of the vaccine means the high case numbers are not leading to large rises in hospital patients. She added however that even if a smaller proportion of people who get Covid go to hospital, a small percentage of a large number is still a lot of people.

She said: “For the moment I do need to stress the vital importance of everyone playing their part in limiting spread of the virus, the more we all do this the more chance we have of avoiding the need for the re-imposition of any formal restrictions.”

She added: “We all have some control over transmission so there are three steps in particular that we must all take to keep the virus, or get the virus, under control and slow down transmission.”

She insisted that the current surge could not be ignored but she will take any decisions, no matter how difficult, to keep Scotland safe.

The First Minister urged businesses to continue to ask workers and customers to “comply fully” with Covid mitigations, such as face coverings in indoor spaces adding that businesses should also continue to work with staff to support home working, where at all possible.

Ms Sturgeon says: “It is, of course, vital for businesses that we do slow the spread and avoid the need for further restrictions and I am grateful to businesses across the country who I know are doing so much to help us achieve this.”

Nicola Sturgeon asked people to follow all guidelines, open the windows if someone is visiting, try and keep a safe distance from others and that the Protect the NHS message of the start of the pandemic is still valid.

The daily test positivity rate in Scotland was 14.2%, up from 11.5% the previous day. There was also a record number of tests on Thursday.

A total of 479 people were in hospital on Thursday with recently confirmed Covid-19, up 53, with 47 patients in intensive care, no change.