A leading North Sea independent has said it is well placed to achieve significant growth after maintaining investment amid the slump triggered by the coronavirus crisis.

Serica Energy chief executive Mitch Flegg said the company is set to enjoy a big boost to revenues in coming months during which two projects are due to be completed.

The company is on course to start production from an additional well on the giant Rhum field off Shetland in the current quarter. It expects to bring the Columbus field east of Aberdeen onstream in the following three months.

The resulting increase in output will allow Serica to capitalise on the rally in gas prices which has been seen in recent months. Around 80 per cent of its production is gas.

After the cold winter and the strong recovery in China boosted demand, the rally has gathered pace alongside the rollout of coronavirus vaccines. Mr Flegg noted that gas prices are now higher than before the pandemic.

“The important thing about last year was we did not alter our strategy, we didn’t stop our investment programme,” said Mr Flegg, adding: “It would have been easy when gas prices were cratering to have said we’ll shelve it and do it later but we’ve done it all.”

Serica is ready to use the resulting boost to cashflow to help fund big acquisitions.

“We think we have positioned ourselves well to take advantage of opportunities as they come up,” said Mr Flegg, who noted that Serica has no debt. 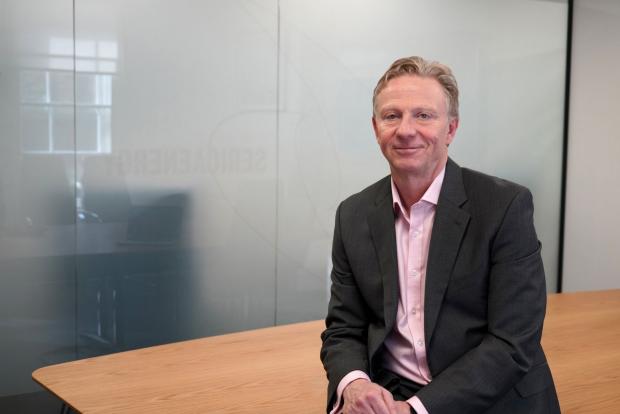 The company is in the market for material deals and is actively looking at opportunities.

Serica has a stock market capitalisation of around £370 million.

Lots of assets are on the market, amid a shake-up in the area that has been given fresh impetus by the fallout from the coronavirus crisis.

While some firms are looking to reduce exposure to the North Sea, competition for deals in the area has intensified in recent months. Private equity investors have underlined their belief in its potential by backing firms such as NEO Energy to make big acquisitions.

However, Mr Flegg is confident that Serica has an edge after proving that it can make a success of acquisitions that others might think look too challenging, on political or commercial grounds.

For example, Serica acquired its interest in Rhum at a time when the Iranian national oil company had a 50 per cent stake in the field. It had to secure exemptions from the sanctions that Donald Trump imposed on Iran while he was president.

The Iranian government no longer has an interest in Rhum.

Serica acquired its interest in Rhum along with stakes in the Bruce and Keith fields from BP, Total and other firms in a series of transactions that completed in 2018.

Mr Flegg thinks Serica has shown it can create value by investing in assets that bigger fish lost interest in.

The R3 well that it is preparing to bring into production on Rhum was drilled by BP in 2005 but not brought into use. Serica had to clear equipment that had been left in the well.

Mr Flegg reckons the expected production increase will provide vindication for Serica’s decision to maintain its course last year when others were slashing investment in new developments.

The company will also benefit from being able to retain all the cash flow generated from the BKR assets from January 1. Under the terms of the BKR acquisitions it has to share the cash flow with the vendors until then.

Mr Flegg said the company has identified a range of other development opportunities on the BKR acreage.

He is confident that firms such as Serica have an important role to play in the energy transition in spite of calls by campaigners for activity to be curbed on environmental grounds.

With demand for gas set to remain strong for years the UK would be required to import more from other countries if domestic production was cut. That would be likely to result in an increase in emissions.

Mr Flegg noted that Serica has cut emissions associated with its production, by reducing flaring for example. He thinks it can move faster on the emissions front than majors that are working with big global portfolios.

The price of Brent crude has risen strongly since November, to a near three-year high of around $76 per barrel.