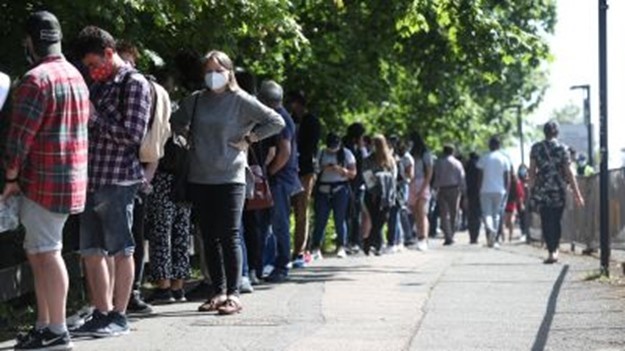 There is nothing quite as British as a queue.

At least that is the old cliche repeated by visitors to these islands as they marvel at orderly commuters lining up for buses.

They have a point, the bemused foreigners. We Brits really are good at waiting, or at least we are expected to look as if we are. It’s good manners, you see.

This half year or so has properly tested the stereotype: we have all had to queue – the young for longer than the old – for jabs that could save our lives. And, by and large, we have done so patiently.

Of course, this is also true of countries where – according to an arguably prejudiced British perspective – impatient locals will elbow their way on to the bus.

Around the world – or at least in its lucky and rich corners – people are mostly waiting their turn for Covid vaccinations. But not everybody. Some folk want to cut in line. A few are prepared to lie and cheat to do so. And they can be found just about everywhere.

Yet attitudes to queue-jumpers – and how to deal with them – vary dramatically internationally.

Take Italy. This, according to another well-worn and far from always fair stereotype, is the land of the ‘furbetti”, sly types who cut corners and bend the rules to get ahead. It is also a country where – if we can dust off another cliche – where lots of people cannot stand sneaks, including, it seems, the cops.

The news magazine Panorama this week revealed that police are investigating something like 1,500 Italians for illegal queue jumping. Suspects include powerful and influential people and are up an down the country. The probes under way, the publication said, without too much by way of evidence, was just “the tip of the iceberg”. Its main theory? That people pretend to be in a priority group – such as being a carer for a vulnerable person – to get vaccines they would otherwise have to wait for. In fact, Naples prosecuting magistrate Henry John Woodcock has already launched an investigation into fake caregivers in the city.

There is a practical reason for queue-jumping in Italy. It is one of the countries where you will need a vaccine certificate – a Green Pass – to elbow your way on to a long-distance bus, train or plane. Or eat a pizza indoors. Panorama revealed that vaccine certificates were on sale too. For 500 euros. Indeed, concerns about fake documents were one of the reasons why Scotland’s paper-only jab certificates (most other places have fancy QR codes to stop cheats) were only recognised in Italy earlier this month.

France is another nation adopting such passports for those who have had their shots. It has just overtaken the UK in its vaccine roll-out (Italy is not far behind, Britain has been slipping down the rankings, not least because it was slow to jab children).

A 25-year-old French engineer came up with a computer programme, called Vitemadose, that allowed people to show up at pharmacies to get unused doses. This got a lot of vaccine into a lot of arms. Writing back in May, a Financial Times correspondent in Paris, David Keohane, talked of how France had declared all adults would be eligible for inoculation as early as June. However, he added that lots of people were already flouting age and other restrictions. “Turning a blind eye to some people ‘jumping’ the queue is probably a feature, rather than a bug, of the current system,” Mr Keohane reported.

Read more: What the independence polls really show – and why squabbling over them will scramble your brains

France, bear in mind, has topped the UK on the vaccine roll-out despite reportedly higher levels of vaccine hesitancy. Is it harder to be cross about those who cheat to get their jab when you are mostly worried about those who don’t want to get vaccinated at all?

Not that the country has not had its scandals with queue-jumping. Back in February its health minister condemned the board of a private hospital whose members, despite not working on the front line, got jabbed. A similar row tarred the early roll-out of Covid vaccines in Spain where a handful of politician and officials were forced to resign when it emerged they had got doses intended for doctors, nurses and care home workers.

Sometimes governments encourage legal queue-jumping. In Russia – where a disinformation campaign against foreign jabs has misfired and take-up of its own brand is low – authorities have allowed vaccine tourism: when rich patients from poor countries fly in for inoculations.

Stephen Carter, the American jurist and novelist, earlier this year stressed that rules on who get shots could look arbitrary, and therefore unjust. In some US states caregivers got vaccines and in others they did not. Is it wrong to cross the border? “I’m not advocating for jumping the queue. I’m just suggesting that the ethical question involved can be more complicated than what’s been derided as ‘the I-deserve-it-more attitude’,” Mr Carter wrote. “If indeed we’re entering an era of pandemics, we’ll face the same choices again. Let’s hope for some serious public debate about priorities before the next one strikes.”

Counting queue-jumpers would be impossible but there are at least suspicions of cases in the UK. Health authorities in London complained about people falsely claiming to work on the frontline. In Scotland, the police federation, frustrated its members were not higher up on the priority list, called for an investigation, like the one in Naples, into fake unpaid carers. Yet it looks like the issue has not been much discussed in the UK? Why?

Are we not talking about queue jumping because it didn’t really happen much or because we don’t care that it did?

Our columns are a platform for writers to express their opinions. They do not necessarily represent the views of The Herald.