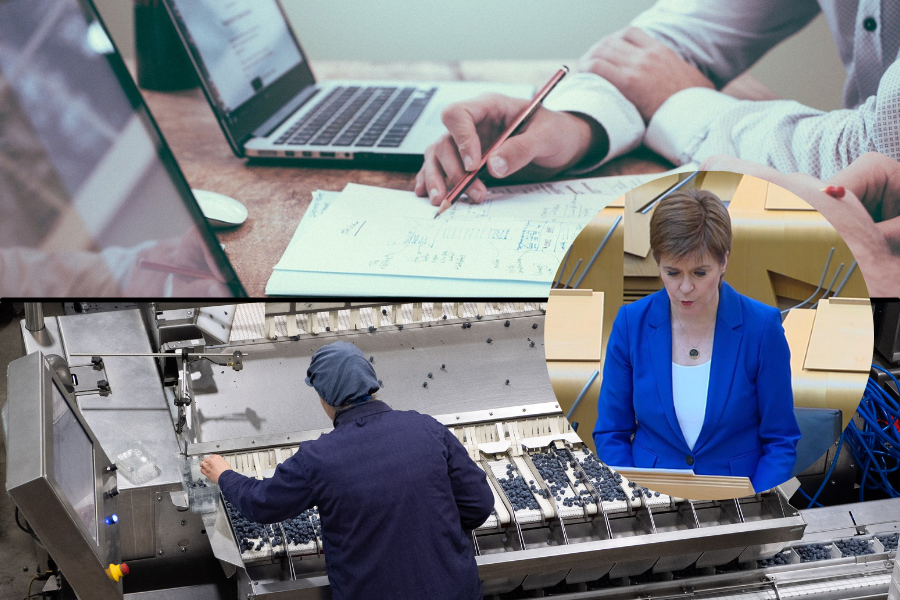 IF there was a perfect solution to the ongoing labour crisis gripping the nation’s food and drink sector, then championing a four-day work week in Scotland isn’t it.

It is all very well to keep referencing the recent IPPR Scotland survey that found that 80 per cent of Scots would like to have a four-day work week – for the same pay. Honestly, who wouldn’t agree to this? But I must ask the question: do they live in the real world?

There are very few people and businesses that this might work for. Scotland’s food and drink sector, which has been plagued with labour shortages, certainly isn’t one of them.

What we have here is a vote winner, and with the SNP and the Scottish Greens poised to push on with another independence referendum, popular policies will be in their favour.

The Scottish Government is no doubt feeling positive about delivering this pilot, spurred on by the recent success of a four-year trial in Iceland, which reduced the working hours of 2,500 workers from 40-hour work weeks to 35-hour, for the same pay.

A range of workplaces took part, including preschools, offices, social service providers and hospitals, with the successful pilot now rolled out nationally to 86% of Iceland’s workforce.

We must be careful to note that this trial took place pre-Covid, and only amounted to freeing up roughly one afternoon a week. It also applied mostly to public sector roles.

It is all fair and well to trial a four-day working week for nine-to-five office-based workers but that isn’t going to offer much consolation to those food and drink businesses who are currently operating in autopilot, stretching already squeezed staffing levels to the limit, all in a desperate effort to keep food on our supermarket shelves.

I’m not going to drone on about the recent dreary headlines warning that pigs in blankets and turkey might be off the Christmas menu, but we have all seen them.

In a recent survey by the Food and Drink Federation, of 88 Scottish businesses that responded, 93% currently had job vacancies and 97% felt they would struggle to fill vacancies in the future. A lot of these roles are in areas such as food processing and HGV driving – the individuals responsible for keeping the wheels of our food economy turning but who will never be able to benefit from such an idealistic flexible-working notion until we can properly attract and retain workers in these areas.

This is a topic I have covered often in recent months and requires a serious change in attitude from both policy makers and members of the public, who too often look down on such professions then wonder why we are in such a guddle with post-Brexit labour shortages, when our European workers neighbours have gone home. I agree with the SNP that the Tories at Westminster are to blame for a lot of the challenges with labour we are currently facing. However, instead of my inbox being filled with repetitive finger pointing about a “botched Brexit” and how it is the “Tory mess” to deal with, I would be much more inspired to hear what action they are taking to promote jobs within the food and drink sector as a great career destination; and what they are doing to provide opportunities through apprenticeships and other schemes.

I experienced a four-day working week during a summer working at BBC Sport, albeit still full-time hours. At the time, I thought it was a brilliant idea: I worked four 10-hour shifts a week and had a great work-life balance.

On reflection, I can acknowledge that I was working for a large organisation with a huge supply of staff and freelancers, eager and willing to fill any gaps. There was never a concern that work wouldn’t be completed, that a deadline would be missed – strength in numbers.

But if you look elsewhere in journalism, every paper and magazine has made cuts over the past few years as print sales have declined and, in some instances, employees are expected to do double the work for the same pay. I’m quite sure many of my print colleagues would welcome the pilot if it meant their pay would remain the same, but I cannot imagine their workload being completed within a shorter timeframe – unacknowledged overtime is rife as it is.

Journalism is no exception, as there are many businesses that would struggle and it is going to be a busy time for HR managers as they are sent into recruitment overdrive to fill the gaps.

There is no denying that we are all in need of a wellbeing boost, and the idea of introducing flexible working to strike a better work-life balance is a welcome thought – and one which will woo many.

The past 18 months has shed a much-needed light on mental wellbeing and without the usual social excursions and interactions, most of us have struggled with the separation from friends and loved ones.

So, I commend the Scottish Government for exploring this pilot, and for supporting a move towards more flexible working practices, but the pragmatist in me struggles to grapple with such a notion when every second story I’m writing carries the headline “labour crisis”.

Our supply chains have never been so broken, lack of labour has been crippling Scotland’s food and drink sector and it looks like it is only going to get worse in the build-up to peak trading season at Christmas. Addressing these labour shortages has to be our Government’s priority, instead of driving a bigger wedge between those working in blue-collar and white-collar jobs.