HEALTH and social care services in Scotland are to be bolstered by an extra £300 million of funding amid warnings that the NHS is facing its “most challenging winter ever”.

Mr Yousaf confirmed that the NHS would remain on an emergency footing until the end of March, adding: “Our NHS is under more pressure than it has been at any point in the pandemic and, quite frankly, it is likely to get worse.”

The £300m package includes £48m to enable employers to raise the pay for adult social care workers to at least £10.02 per hour and £40m to cover the cost of short-term care home places so that elderly patients can, with their consent, be moved out of hospital to “complete their recovery” closer to home.

On average, 1,489 hospital beds were being lost each day in August to patients who were well enough to leave but unable to be discharged, mostly due to a lack of social care support.

The bottleneck has been blamed for exacerbating A&E waiting times and ambulance delays by reducing the availability of hospital beds for those requiring an urgent admission.

A further £62m will be spent on increasing care-at-home provision, said Mr Yousaf.

Mr Yousaf said he rejects “any suggestion that general practice has been closed” and stressed that phone and video consultation with GPs would continue to form part of a “hybrid model” of care.

He added: “However, with recent changes to guidance and the measures we’re announcing today I would expect to see an increase in GP face to face appointments.”

distancing requirement for healthcare settings from two metres to one metre.

READ MORE: Face to face appointments must be rationed for good to cope with rising demand, says GP leader

However, GPs have warned that they are carrying out more consultations per day than pre-pandemic and any return to face-to-face appointments by default – rather than based on clinical priority – would be unsustainable due to growing demand.

Health boards have also been allocated £4.5m “to recruit at least 200 registered nurses from overseas by March 2022”, with £15m ring-fenced to pay for “targeted incentivisation payments” to help plug priority shortages in the NHS.

Eligible healthcare students will be signposted through their universities and colleges to available fixed term and bank work as healthcare support workers over the coming months.

“We expect this additional investment to make a significant impact over the course of the winter,” said Mr Yousaf.

“That being said it is important for me to be upfront and honest with the public and recognise that this winter is likely to be the most challenging we have ever faced.”

The Scottish Government is also appealing to recently retired NHS staff to return to the frontline.

It comes after a recent survey of more than 200 retired surgeons by the Royal College of Surgeons Edinburgh found that just 15 per cent had actually been asked to return to the NHS.

Its president Professor Michael Griffin urged the NHS to “think outside the box” and “come up with a plan to efficiently reintegrate these individuals”, particularly to help speed up diagnostics.

Professor Jackie Taylor, the president of the Royal College of Physicians and Surgeon Glasgow, said retired medics are an “untapped resource”.

However, she told the Herald that too many had been put off early on because the process was “so complex” or because they were offered unsuitable posts.

Speaking as the College hosts its two-day ‘Time to Heal’ conference, starting tomorrow, Prof Taylor said:”I do believe we have an untapped resource in clinicians who were invited to return onto the emergency GMC register at the very beginning of the pandemic.

“In the UK over 25,000 clinicians returned to the emergency registers and in Scotland I think it was about 2,500, [but] only a very small proportion who returned onto that register were actually deployed in any way, shape or form.

“People are disengaged with the process because it was so complex and, at the end of the day, they were either offered something inappropriate or nothing at all.

“My belief, and anecdotally from colleagues and members of our College who have said this, if approached again – if there was a system that worked – I think people are prepared to come back. So I do think there is an urgent piece of work that needs to be done there.”

Prof Taylor added that international recruitment would be “much more difficult”.

Meanwhile, charity Chest Heart & Stroke Scotland warned that bureaucracy was at times preventing its staff from supporting patients with chest, heart and stroke conditions, or Covid survivors, from moving out of hospital.

Chief executive Jane-Claire Judson said: “We know our Hospital to Home services work best when NHS staff can refer directly into them. But to do that, we have to negotiate different data sharing agreements with each Health Board and GP grouping. This is a process that can go smoothly but can also be snarled up in too much paperwork.” 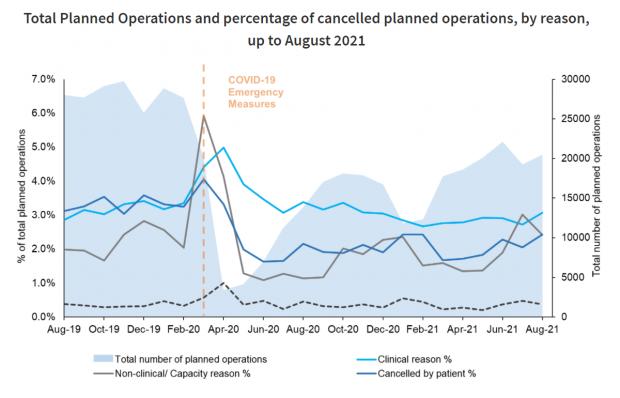 It comes as figures show that a record 1,410 people spent more than 12 hours in A&E departments in August, with September on track to be even worse.

The total number of elective operations carried out in August – at 18,790 – was up 48% year-on-year, but remains 27% below pre-pandemic levels.

Scottish Labour health spokeswoman Jackie Baillie said the winter plan was “a sticking plaster for an NHS in crisis”, with 96,000 waiting for a hospital procedure.

She added that social care staff should be paid £15 an hour.

“As long as working on the checkout at a supermarket pays more than working as a carer, we will continue to have a staffing crisis,” said Ms Baillie.