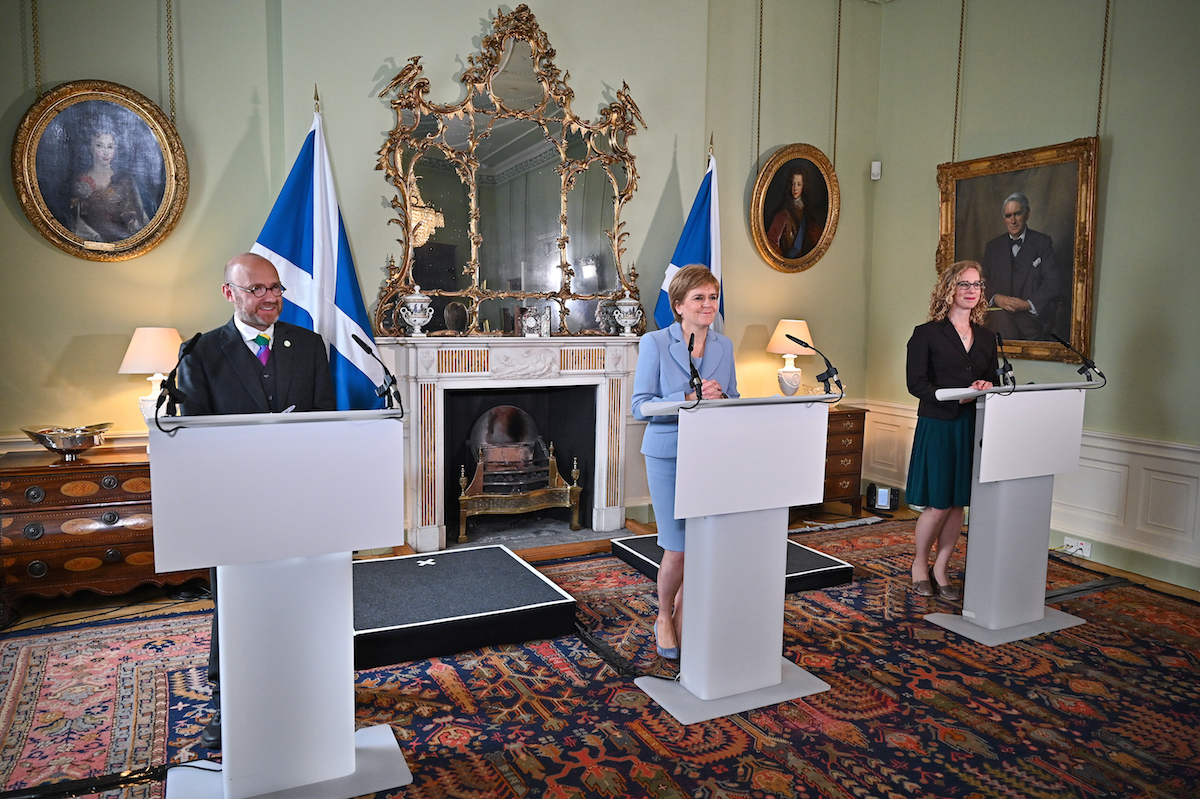 NICOLA Sturgeon has insisted a “groundbreaking” deal reached between her party and the Scottish Greens makes it “impossible on any democratic basis” for Boris Johnson to continue to ignore demands for a second independence referendum.

The First Minister, flanked by Greens co-leaders Lorna Slater and Patrick Harvie at Bute House, announced the two parties had “reached a proposed co-operation agreement”, which she labelled “groundbreaking in both Scottish and in UK politics”.

But the co-operation deal, falling short of a formal coalition, includes a host of areas excluded from agreement including aviation policy, green ports and the use of GDP to measure Scotland’s economic growth.

The agreement formalises the pro-independence majority in Holyrood, after the SNP fell just one seat short of an overall majority in May’s election, as well as solidifying a timetable for another vote.

Ms Sturgeon confirmed that the SNP and Greens will “work together to develop the case for independence”.

The deal states the SNP and Greens aim to hold another referendum on independence in the first half of the parliamentary session, meaning before the end of 2024, if the Covid-19 pandemic has ended.

Now, Scottish Green members and the SNP national executive committee will have to give the deal their support for it to be approved.

But the Scottish Conservatives labelled the agreement a “nationalist coalition of chaos focused on splitting up the country” while business leaders have called for the Scottish Government to bring forward “a commitment to implement stronger pro-business policies”.

Included in the deal is a 10-year £500 million just transition fund for the oil and gas sector in the North East and Moray and a commitment to increase the Scottish Child Payment – with the full £20 amount being achieved by the end of the parliamentary term.

The First Minister insisted she is “determined that there will be an independence referendum in this parliament”, adding that “Covid permitting, that will be in the first half of this parliamentary term”.

Ms Sturgeon added: “I believe Scotland should be independent so that we can better equip ourselves to recover from Covid in the way that I think a majority of people across our country wishes to do – towards a greener, fairer Scotland.

“This agreement, I think, it makes it hard and indeed impossible on any democratic basis for a UK Government to resist the right of the Scottish people to choose their own future.

“We’re simply asking for democracy to be respected.”

She added: “We don’t have identical visions for an independent Scotland, I think we saw that in the 2014 referendum.

“We will have the opportunity to work together to develop the case for independence.”

Mr Harvie said he was “very confident and hopeful” that his party members will back the agreement and “see this as an extraordinary opportunity”.

READ MORE: The six issues excluded from Bute House Agreement and why

He added: “This is a historic moment, which could not come at a more important time. We must build a fairer and compassionate country and we must do everything in our power to tackle the escalating climate and nature emergencies to deliver a just transition for all.

“That is what this deal will do. Fundamentally this is a new approach to politics. We agree on some things and disagree on others – those distinctive voices can and will remain.”

But Scottish Conservative leader Douglas Ross has claimed the SNP and Greens “will work and vote together as one nationalist government on all but a handful of issues”.

He said: “The 50-odd pages of their policy programme could be boiled down to one word above everything else – separation. This is a nationalist coalition of chaos focused on splitting up the country and dividing Scotland with another bitter referendum.

“Nicola Sturgeon failed to win a majority so she’s had to turn to the extremist Greens to help her push for indyref2 during an economic crisis.”

Mr Ross added: “There are now opponents of the oil and gas industry at the very heart of the SNP-Green Government. They will undoubtedly be using their new influence to push for an end to the North Sea sector as soon as possible, risking the 100,000 Scottish jobs it supports.”

Scottish Labour leader Anas Sarwar suggested the two pro-independence parties have “formalised the coalition of cuts that has been in action for years”.

He added: “This will come as a surprise to no-one, but it is a disaster for Scotland.

“This straitjacket deal covers all but a handful of issues, with the so-called Greens endorsing the SNP’s dismal track record on everything from austerity to the environment.”

Liz Cameron, the chief executie of the Scottish Chambers of Commerce, stressed that “businesses will want to very carefully examine the detail of this agreement to understand what the implications are for the direction of the Scottish Government and Scotland’s economy”.

She added: “Businesses have been clear that what they are looking for from the Scottish Government, whatever its composition, is a commitment to implement stronger pro-business policies, creating an economic environment which will enable us to grow, continue to employ talent and make Scotland an increasingly attractive place for investors.

“Scotland’s business communities are looking for demonstrable actions which fit these needs and expectations for employers, employees, and our young people entering the workplace for the first time.”

In response to questions over the exclusion of GDP being used to measure Scotland’s economic growth, Ms Slater insisted “there’s a lot in this agreement that is terrific for business”.

She later added: “I have spoken to the Cabinet Secretary and she will continue to use GDP to measure Scotland’s economic progress – whereas the Scottish Greens don’t believe that growth is a sensible measure to use on a finite planet.”