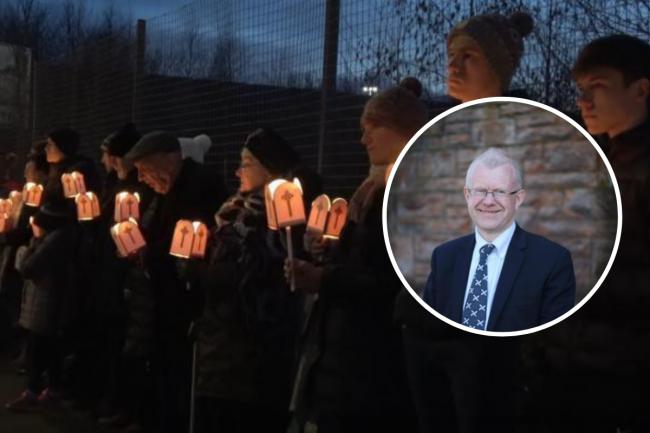 An SNP MSP claimed that abortion services are seldom “essential” or “vital” and has admitted attending an anti-abortion protest outside of a clinic.

In response to an email in support of the Back Off Scotland campaign, which is calling on the Scottish Government to introduce 150m no protest zones – or buffer zones – around abortion clinics in Scotland, Glasgow Shettleston MSP John Mason described an anti-abortion gathering outside of Glasgow’s Queen Elizabeth University Hospital as a “vigil” adding that he is “unconvinced we have any great problem in Scotland or need to have new legislation”.

Currently, anti-abortion ‘vigils’ are being held by 40 Days for Life campaigners outside of Edinburgh’s Chalmers centre where abortions are accessed.

Back Off Scotland believe that new legislation should be introduced by the Scottish Government to protect women from harassment from these campaigners.

A Back Off Scotland supporter emailed Mr Mason asking for him to support the introduction of a new legal provision.

Really disappointing email to wake up to on a Thursday morning. John Mason, an SNP MSP, stating that he’s attended an anti-choice protest and that abortion services are “seldom essential or vital”.

In the email, which has been seen by The Herald, she wrote: “As a result of Covid-19, some people having abortions are having to attend appointments alone – meaning they may not have the support they need to cope with this type of presence.

“The type of activity differs across the country, and they’re organised by many different groups. There are people who stand outside hospitals with graphic posters and signs, people who approach service users and passers-by and give out false messages about abortion care and vaccines, people who shout at patients and intimidate them, telling people who have had abortions that they will get cancer.

“Buffer zones would put a stop to this harassment – moving anti-choice activity away from the clinic and hospital gates and allowing people to access care free from harassment, alarm, and distress. Anti-choice groups would still be able to protest outside Holyrood, on the High Street, on the internet – but wouldn’t be able to target individual patients who are trying to access legal, essential services.

“That is why I am asking you to support the introduction of a new legal provision, based on laws already in place in Canada, Australia, and the Isle of Man, to move these protesters away from the hospital entrance. Not to stop protest, but to tell them that harassing people trying to access healthcare is not acceptable.”

Responding to the supporter, Mr Mason said that abortion is a “highly controversial and sensitive subject”.

He added: “I have only visited one of these gatherings outside a hospital.  It was at the QEUH in Glasgow and could not really be described as a protest.  It was more like a vigil.  They stood across a wide road from the hospital entrance and certainly did not approach anyone, harass anyone, or cause alarm or distress.  Therefore, I am wondering which sites in Scotland have been causing a problem?

“I take your point that abortion services are completely legal, however, I would have thought they are seldom ‘essential’ or ‘vital’.  You make the point that someone may not have support when they attend a hospital or clinic.  However, it may also be the case that this is one of the few opportunities that they realise they have a choice.  Sadly some women are being coerced by a partner or family to have an abortion when they may not realise they have a choice, e.g. by having the baby and giving him/her up for adoption.”

The email was then passed on to Back Off Scotland founders, who took to Twitter and wrote: “Really disappointing email to wake up to on a Thursday morning. John Mason, an SNP MSP, stating that he’s attended an anti-choice protest and that abortion services are “seldom essential or vital”.

I’m hearing more and more from women being harassed at abortion clinics. This has to stop

Women must have access to all healthcare, free from harassment

Buffer zones around abortion clinics are key to this and the SNP must take urgent action to ensure & enforce them.

They also asked the First Minister and the Minister for Women’s Health Maree Todd if the response was appropriate.

Mr Mason has confirmed the email to the Herald and his belief that life begins at conception.

“Today, there’s a move down south for compassionate leave for women who lose a baby which is under 24 weeks and I think that underlines we’re talking about a baby.

“I visited a, what I would call a vigil outside the QEUH, it was very peaceful and I wouldn’t have said it was a protest, so I don’t see the need to legislate on it.”

Lucy Grieve, founder of Back Off Scotland said: ““This type of attitude has no place in Scotland, let alone Parliament. It’s very disturbing, but not all that unexpected given the Scottish Government’s abdication of responsibility on the buffer zone issue.

“First the Scottish Government say that buffer zones are a matter for local authorities. Then Edinburgh Council and Glasgow Council say it’s a matter for the government. And then the Scottish Government says they “don’t have a magic wand” and their hands are tied. They need to take ownership of this issue immediately and implement buffer zones nationally instead of pawning it off to local councils.”

She said: “This is a deeply worrying admission from anti-choice MSP John Mason and must be fully investigated by the SNP.

“Those who gather in this way near clinics are causing distress to women seeking abortion services.

“Nicola Sturgeon cannot look the other way any longer. The Back Off Scotland campaign is asking for urgent legislation on buffer zones around abortion clinics to allow women to access abortion services safely and free from harassment. Ministers must get on with it.”

Scottish Greens health spokesperson Gillian Mackay said: “It’s long past time John Mason came to recognise that 82 per cent of Scots want to end these ‘vigils’, because most people recognise that women should have a right to access healthcare services without being harassed, intimidated or made to feel like their morals are in question.

“This isn’t a morality issue, it is one of rights, and I would encourage local authorities to use existing by-laws to ensure women have access to services.”

Scottish Liberal Democrats MSP Beatrice Wishart said: “John Mason is wildly out of touch with the people of Scotland. It’s really rather scary that someone with views like this is a lawmaker with the power to influence women’s healthcare.

“Abortion services have for decades been part of the healthcare system. For years my party and I have backed campaigners calling to set up these buffer zones. Every patient should be able to receive the medical treatment they need without fear of harassment or intimidation.”

Scottish Conservative and Unionist Lothian Shadow Public Health Minister Sue Webber said: “John Mason has proven himself again, to be woefully out of touch with modern Scotland, in describing abortion as seldom essential.”

“For an SNP MSP to underestimate the vast importance of access to reproductive healthcare, is simply outrageous.”

“We must ensure that women across Scotland are able to access this vital service free from harassment and judgement.”