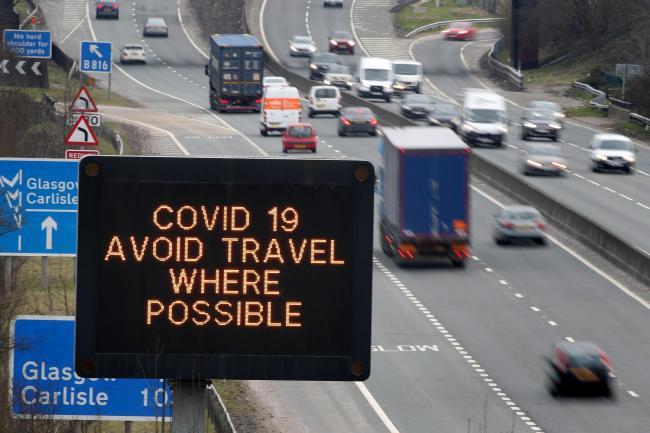 SNP ministers have been told to axe their “out of control road-building programme” worth £7 billion one day after a stark UN report warned politicians that immediate action is needed to avert climate catastrophe.

The Scottish Government has pledged to become net zero by 2045 and cut 1990 levels of emissions by 75% by 2030 and has insisted that all new projects are “subject to significant assessment work to ensure we deliver the right schemes and minimise impacts on the environment”.

Ministers have promised to cut car kilometres travelled in Scotland by 20% by 2030 as part of the plan – but are yet to publish a blueprint as to how the aim will be achieved. Ministers have big road improvement projects in the pipeline including work on the A9 and A96.

Sustainable Transport campaigners, Transform Scotland, hopes the cooperation deal being discussed at Holyrood between the SNP and the Greens will put more pressure on the Scottish Government to cancel its road expansion plans.

The group has published a new report that reveals SNP ministers intend to almost double their spending on new roads over the next decade despite the climate emergency.

Transport is the biggest contributor of Scotland’s carbon emissions and there has been very little progress in cutting pollution in the transport sector.

Transform Scotland’s report found that road transport accounts for 24% of all of Scottish emissions.

The Scottish Government’s 16 ongoing or planned projects represent a total spend of £7 billion.

Colin Howden, director of Transform Scotland, said: “It’s now time for the Scottish Government to call a halt to its out-of-control road-building programme.

“Despite there being no progress in cutting climate emissions from the transport sector in 30 years, the Scottish ministers’ capital investment plans for transport are horribly skewed towards new climate-trashing roads.

“We urgently need to switch investment from high-carbon roads into zero-emission public transport and active travel.”

Mr Howden said that the original justification for building new roads was “built on forecasts of unceasing growth in road traffic”, adding that “this is now an outdated and unsustainable approach”.

He added: “In order to meet its climate targets, the Scottish Government has committed to reducing road traffic levels by 20% over the next decade.

“The Scottish ministers need to be sending Transport Scotland’s army of roads engineers for retraining so they are instead better equipped to deliver low-carbon infrastructure.

“It would be a national embarrassment for the Scottish ministers to fail to show leadership in this area in the run-up to COP26 in Glasgow.”

Speaking on BBC Good Morning Scotland, Mr Howden suggested the potential for the Scottish Greens to form a cooperation agreement with the SNP could make it more likely that roads projects could be axed.

He said: “The Greens would, I think, tend to agree with us with our critique of the Scottish Government’s road programme.

“I would hope that perhaps there might be some movement here.”

The Transform Scotland study found that between 2011 and 2021, the Scottish Government spent £4 billion on building new roads, according to the analysis. The average cost escalation across the five largest projects over the last decade was 86% – almost a doubling of funding.

The Sheriffhall roundabout scheme on Edinburgh’s city bypass has already experienced a 132% cost increase from £50 million to £116 million even before construction has begun.

A spokesperson for Transport Scotland said: “The Sustainable Investment Hierarchy, as set out Scotland’s National Transport Strategy, is clear that we will not build infrastructure to cater for forecasts of unconstrained increases in traffic volumes.

“This approach is embedded in the second Strategic Transport Projects Review (STPR2), which is in progress and due to report later this year, will consider how the impact of the Covid-19 pandemic may shape our future transport system, the demands placed on it, as well as identifying transport interventions which help deliver our commitment to create an inclusive and net zero emissions economy.

“The publication of our STPR2 phase 1 recommendations in February clearly set out our ambitions to maintain and make best use of our existing transport assets over building new infrastructure.

“All major projects within the Scottish Government’s transport portfolio are subject to significant assessment work to ensure we deliver the right schemes and minimise impacts on the environment.

“We need to balance the extensive changes required to meet a target of net-zero greenhouse gas emissions with our duty to ensure that Scotland has high quality infrastructure to meet the needs of all our residents, businesses and visitors.”