Teachers have stepped back from demanding that national guidance on supporting transgender pupils be withdrawn.

A Scottish Secondary Teachers’ Association (SSTA) motion that, if passed, would have called for the advice to be pulled has been paused pending further discussions with the Government.

It comes after ministers published guidance outlining how schools should respond to transgender pupils and ensure they are safe and included, both within and outside the classroom. The document recommends approaches such as not forcing a transgender individual to use a specific toilet, trying to make social dancing events less gender-specific, and using the name and pronouns requested by a child or young person.

SSTA concerns focus largely on what should happen to details disclosed by a pupil and whether these can be passed on without their consent.

Union leaders said there were fears over professional and legal risks for teachers who are recipients of such information. The original motion, which was due to be debated during Saturday’s SSTA Congress, said the latest guidance should be withdrawn until an appropriate legislative basis is established.

It stated: “In view of the recently published document ‘Supporting Transgender Pupils in Schools – Guidance for Scottish Schools’ (August 2021), this Congress is greatly concerned over safeguarding and other issues, including: the potential excluding of parents/carers from the process of children under 16 transitioning to another gender; implying that teachers may not pass on information that may be revealed to them by a child without the child’s consent; the potential for professional harm to staff involved in withholding information from parents/carers, including future legal action; that the identified ‘best practice’ has not been rigorously examined for its legal implications nor risk assessed for potential harm it may cause others in the school community, including those with protected characteristics.”

The motion concluded: “Congress believes it is unacceptable for the government to seek to make such consequential changes without legal underpinning. Congress therefore calls on the guidance to be withdrawn until appropriate legislation has been enacted which can then inform the guidance to be disseminated to schools.” 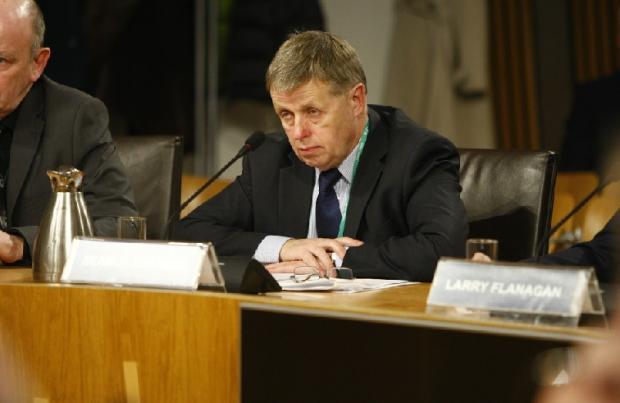 Seamus Searson said there were concerns about professional and legal risks for teachers.

Seamus Searson, SSTA general secretary, previously told The Herald that no-one was “disputing the direction of travel” regarding better in-school support for transgender pupils. However, he said it was important not to rush and stressed that robust professional learning for all staff would be vital.

“Teachers work with parents a lot and they can’t suddenly have secrets from parents,” he added. “As much as the youngster might not wish the parents to know about it, it does put the teachers in a difficult position – and that’s the concern for us.

“Many teachers, at this moment, haven’t discussed this, worked through it, understood it within the school setting in terms of what the processes are.

“If teachers make a mistake and they do the wrong thing, they lay themselves open to [the charge of] not acting in a professional manner and that could end up in a very serious situation.”

He said dismissal, loss of registration with the General Teaching Council for Scotland and potential legal action from parents or pupils were all among the risks faced by staff.

It is understood the Congress motion was withdrawn after Government officials approached union figures and requested a meeting to address their worries.

However, the SSTA has indicated the proposal could be brought back to their council if it is felt existing concerns have not been adequately tackled.

A Government spokesman said: “As is usual as part of policy development and implementation, Scottish Government officials have engaged with SSTA to understand their concerns more fully and have offered to meet to provide further clarification on those points.”

He added: “Decisions on what is discussed at SSTA Congress are entirely a decision for SSTA.”