Which unsung Scots deserve to be immortalised in a statue?

THEY are the unsung Scots who some say should be more widely recognised nationally – with a statue.

While legendary Scots like William Wallace, Robert Burns, Sir Walter Scott and Robert the Bruce have all been immortalised on plinths or monuments – there are many more less well known names that have not but are deserving.

Now the Scottish International Storytelling Festival which launches next month is set to shine a spotlight on the unheard stories of those who should be honoured with a specific focus on marginalised and under-represented voices.

A Talking Statues event taking place every Saturday in September and October will look to set the story straight on existing statues aimed at learning both uncomfortable truths and lesser-known achievements of those already celebrated by monuments.

And in advance of the event, organisers have launched a Scotland-wide call to action to ask the public to research and to imagine who should be on a plinth.

A Talking Statues walking tour in Edinburgh to take place in September and October will feature some of the lesser known Scots who organisers say should be recognised.

They include Bessie Watson, Scotland’s youngest suffragette, who at the age of nine, played the bagpipes across the country on marches campaigning for equality and the right for women to vote.

In 1909 she played the pipes in an Edinburgh rally led by Emmeline Pankhurst, the activist best remembered for organizing the UK suffragette movement and helping women win the right to vote. 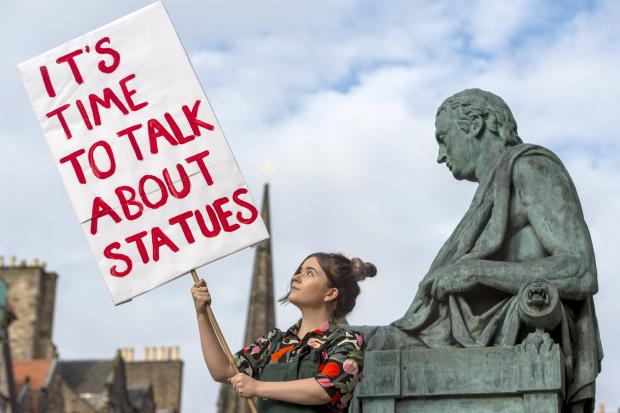 Another that will feature is Joseph Knight who as brought to Scotland as a slave from Jamaica in the 1770s and who historians believe was a key man in the eventual aboliton of slavery in the UK in 1834.

He made history by going to the courts to fight for his freedom. He argued that the ownership of slaves was against the laws of Scotland and he won his case.

The ruling gave the Court of Session the opportunity to declare that slavery was not recognised by Scots law and that runaway slaves could be protected by the courts.

Also on the list is Elsie Inglis the suffragette medical pioneer who made it possible for women to receive medical treatment that many did not have any access to.

She is is known for establishing and running the Scottish Women’s Hospitals – all female units that provided support for Britain’s allies, the French, the Belgians and especially the Serbs.

She was also a prominent campaigner for votes for women and it was through the suffrage movement that she began to raise money to send out female doctors, nurses, orderlies and drivers to the front line.

The medic raised the equivalent of £53m in today’s money and over the course of the war set up 14 hospitals, staffed by 1,500 women who volunteered from all over Scotland, and later from New Zealand, Australia and Canada.

Miriam Morris, storytelling development officer for Traditional Arts & Culture Scotland said: “Many of us pass by statues every day without even thinking about them, why they are there and who they represent.

“As we re-examine our past and look to a better future this project was created to help share stories that deserve to be heard.

“They might be hidden histories behind monuments we pass every day or celebrations of those worthy to be put on a pedestal. For that reason, we are inviting people to research local community or family history by using archives, libraries, online portals or simply strike up conversations with friends and neighbours and we look forward to sharing the stories that are uncovered as part of this year’s Scottish International Storytelling Festival.”

Public suggestions for unsung heroes will be shared as part of a special event led by storyteller Mara Menzies on October 27 as part of the Scottish International Storytelling Festival.

Tania Dron, creative development manager at Mercat Tours, which is hosting the walking tours said: “We will take people on a journey to explore who they’d like to celebrate on a plinth, who we currently look up to and whether they are all worthy of their pedestal. The key may lie in knowing the stories behind the depictions so we can decide whether we look up to them or whether we look up at them and remember their failings can teach us as much as their successes.”